NYC Salesforce Summer of Hacks Recap – Day One and Two 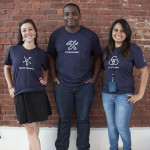 rk, Cincinnati, Jersey and even Finland showed up in force. Students, professionals, couples and even a high school teacher came to forge new relationships and hack Salesforce1 mobile apps.

The night began with the attendees in control where we gave them the floor to pitch their Salesforce1 mobile app ideas.

Once the dust settled we were left with 18 amazing ideas that people could hack on. Teams formed around their ideas and the hacking began with a frenzy.

On Saturday, most of the heavy coding and creating took place. We’re looking forward to seeing the great apps at tomorrows Demo / Judging ceremonies. Everyone is welcome to check out the cool Salesforce1 demos over great food, fun and free t-shirts.

Salesforce Summer Hackathon Series: Summer Will Never Be The Same

June 16, 2014
By Nick Tran
Like our posts?
Subscribe to our blog!
Get notified when we publish new updates.