In my previous post, I shared the Pure Aloe sample application that was first showcased during the developer keynote at Dreamforce ’17. Pure Aloe, a fictional non-profit inspired by The Karibu Centre, uses Salesforce to manage its three core activities: education, agriculture, and retail. In part 1 of this series, we focused on agriculture, and specifically on how Pure Aloe uses Salesforce to manage its aloe fields. In this blog post, we examine how Pure Aloe uses platform events to integrate with its distributors that sell its aloe soaps and lotions.

To support this requirement, we create a platform event called Bundle_Submitted__e with fields like: Bundle Id, Bundle Name, and Qty. The communication between Salesforce and the distributor app then works as follows:

The illustration below shows how this integration materializes in the UI: when a bundle is submitted to distributors in Salesforce, the distributor app is automatically notified and the list of available bundles is updated in real time.

Let’s take a closer look at the two sides of this integration.

Publishing the Bundle_Submitted__e event in Salesforce 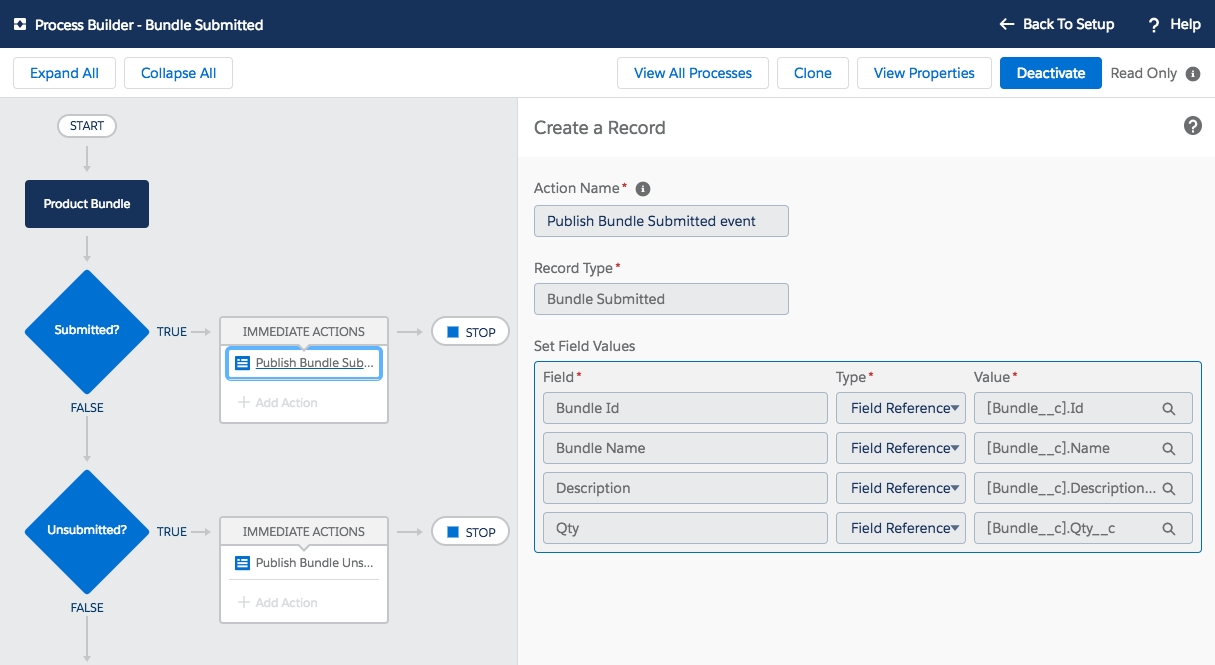 Although using the no-code option when available is considered a best practice, you could also publish platform events programmatically in Apex. The code would look like this:

Subscribing to the Bundle_Submitted__e event in the distributor app

Updating the UI in real time

In the distributor app, the integration consists in processing the event data (for example, persisting the new bundle) upon reception of a Bundle_Submitted__e event. For a better user experience (and a better demo), you may also want to update the UI in real time. For example, if a distributor is looking at a list of bundles in the client app, and the server app receives an event with a new bundle, you may want to add that bundle to the list the distributor is looking at. In the distributor app, the server app uses socket.io to push the new bundle to the client app upon reception of a new platform event.

Our second integration requirement is to notify the Salesforce app when the distributor orders a product bundle.

To support this requirement, we create another platform event called Bundle_Ordered__e with fields like Bundle Id and Account Id. The communication between the distributor app and Salesforce then works as follows:

The illustration below shows the results of this integration in the UI: when a bundle is ordered in the distributor app, the bundle status is automatically updated in Salesforce and the bundle record page is updated in real time.

Let’s take a closer look at the two sides of this integration.

Publishing the Bundle_Ordered__e event in the distributor app

You publish a platform event the same way you create a custom object. In a third-party application, this means you call the Salesforce REST API create record endpoint, or the facility provided by your Salesforce REST API toolkit to create a custom object. The distributor app uses the nforce library. The code to publish the Bundle_Ordered__e platform event in Node.js looks like this:

Subscribing to the Bundle_Ordered__e event in Salesforce

Starting in Winter’18, you can subscribe to platform events using Process Builder. 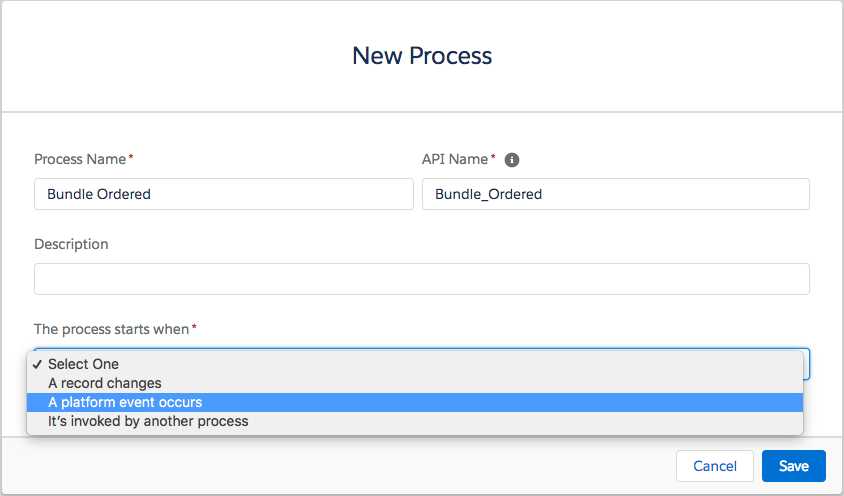 When the platform event occurs, the process changes the bundle status to Ordered by Distributor, and sets the account id of the distributor that ordered the bundle. 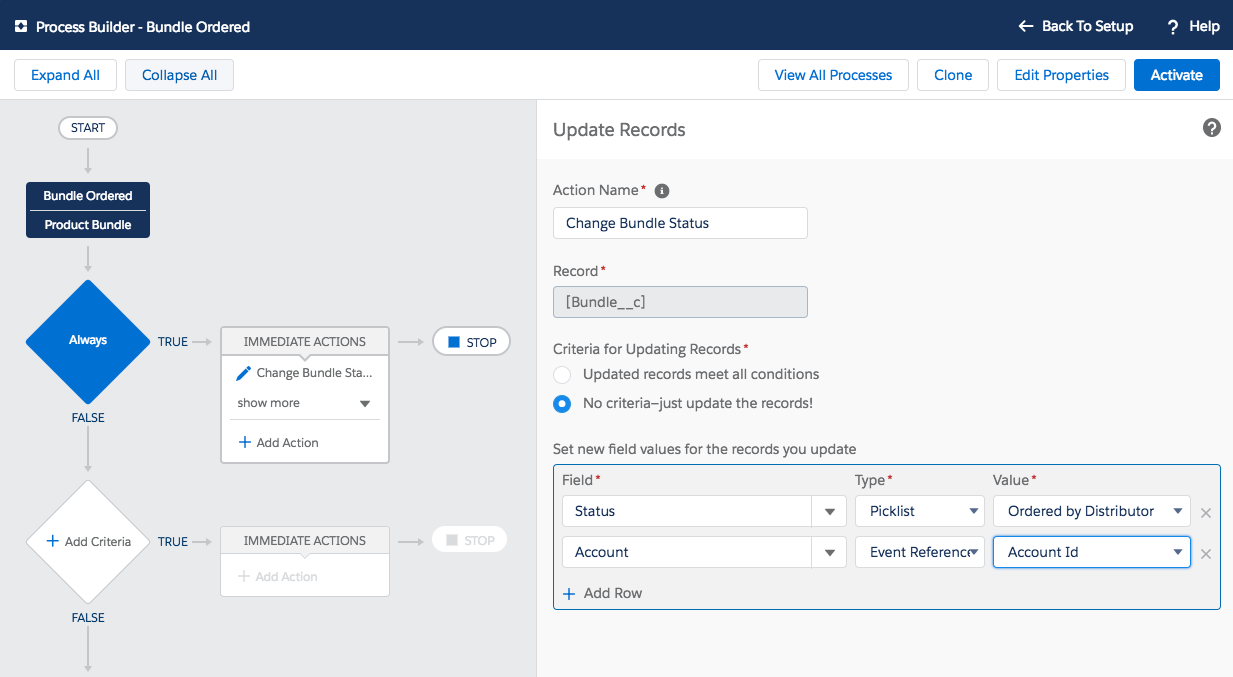 Although using the no-code option when available is considered a best practice, you could also subscribe to the platform event programmatically using an Apex trigger. The code would look like this:

Updating the UI in real time

As described above, this integration consists primarily in updating bundle record fields upon reception of a Bundle_Ordered__e event. For a better user experience, you may also want to update the UI in real time with the event data. For example, if a user is looking at a bundle record page, you may want to update the UI in real time upon reception of the platform event to reflect the new status of the bundle. A first approach would be to have a Lightning Component on the page subscribe to the Bundle_Ordered__e event (see this post for an example). But this approach may lead to inconsistencies between the UI and the database in case the database update performed by the Bundle Ordered process fails (because of a failing validation rule for example). The alternative approach used in the Pure Aloe app is to use the Streaming API to update the UI when the record data changes in the database. That way, the UI updates in real time, but only after the record successfully updates in the database.

Platform events facilitate integration between applications by allowing them to communicate while keeping them entirely decoupled.This blog post demonstrates to use platform events to integrate a Salesforce app with a Node.js app running on Heroku. Try it out today. And because both the retail app (with Salesforce DX) and the manufacturing app are under version control in Github, it’s easier than ever to contribute to the project and submit pull requests!

Christophe Coenraets is a Developer Evangelist at Salesforce where he focuses on the Salesforce Platform, JavaScript frameworks, mobile, and enterprise architecture. Prior to joining Salesforce, Christophe held senior technical positions at Adobe, Macromedia, Sybase and Powersoft where he helped Enterprise customers design, architect and implement strategic applications. Christophe has been a regular speaker at conferences worldwide for the last 15 years. You can follow him on Twitter @ccoenraets.

Platform Events EventBus: A New Chapter in the Never Ending Saga of Bulkification

A Refresher on the Four Streaming APIs and a Monitoring Tool

July 22, 2019
By Philippe Ozil
Like our posts?
Subscribe to our blog!
Get notified when we publish new updates.