Lightning Web Components is a new programming model for building Lightning components. It leverages the web standards breakthroughs of the last five years, can coexist and interoperate with the original Aura programming model, and delivers unparalleled performance.

Until recent years, web standards only offered a limited foundation for the full stack that developers need to build large scale web applications: a rendering engine, standard elements, events, and a core language (ECMAScript 5). In addition to being rudimentary, that foundation had other shortcomings traceable to its roots as a page rendering platform, not an application execution platform. For example: 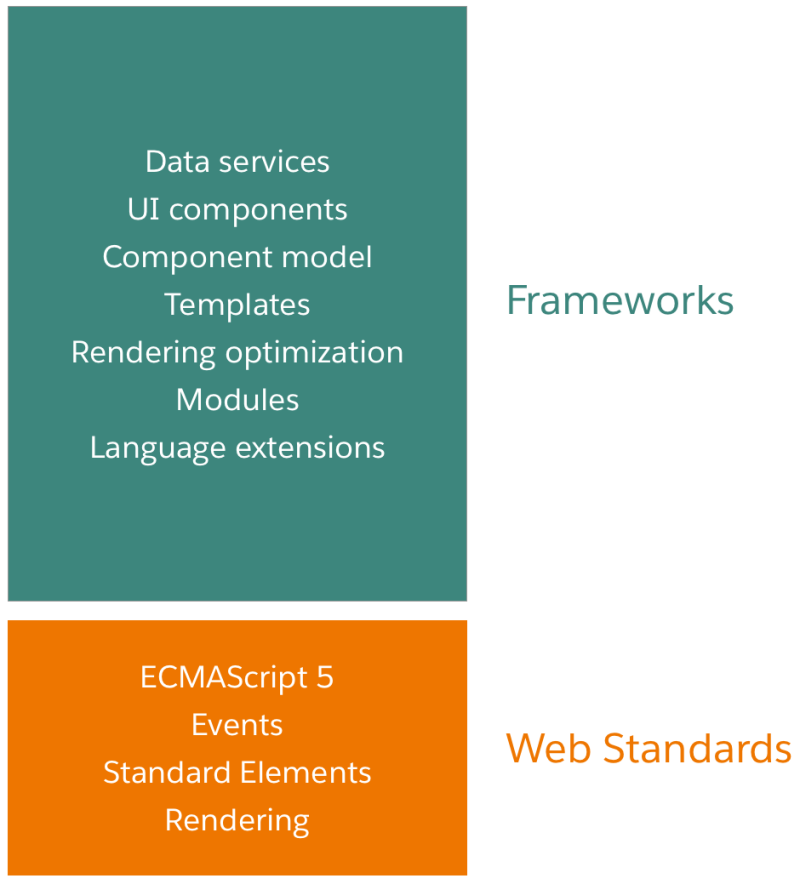 As it is often the case, the community and software vendors jumped in to fill the gaps. For example:

In 2014, when we launched the Lightning Component framework along with the Aura programming model, we were part of that effort to push the web forward and enable large scale client-side application development on the web. In the absence of standards, the Lightning Component framework came with its own component model and its own modular programming model.

Although these community and software vendor efforts made it possible to develop large scale client-side apps on the web, they also came with a number of challenges:

This fragmentation underscored the need for standardization and injected new life in the web standards community: the last five years have seen an unprecedented level of innovation and standardization, mostly driven by the W3C/WHATWG and the ECMAScript Technical Committee (TC39) of which Salesforce is a member. The list of standards developed during the last five years includes:

As a result, the web stack looks very different today than it did five years ago, with its weight now heavily tilting towards standards. 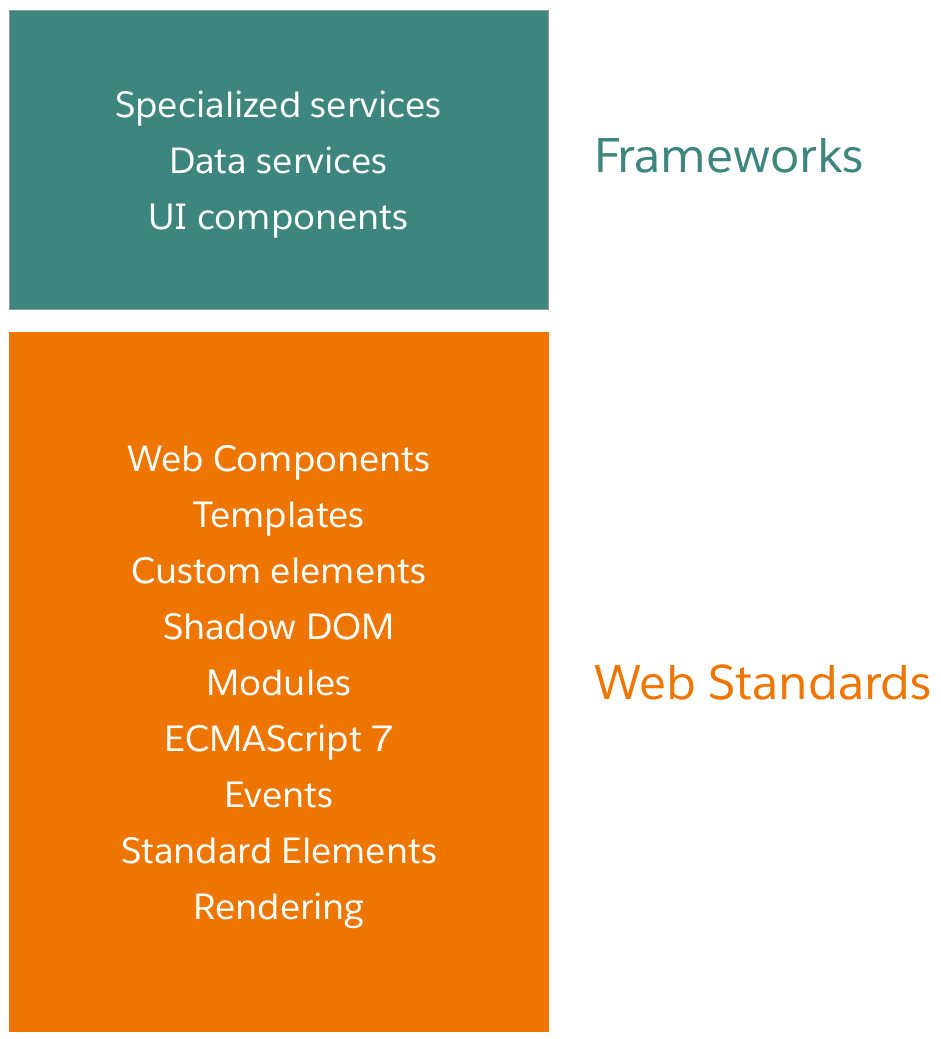 The core stack finally got the update it needed to become an application development platform in its own right. Many features that required frameworks now come standard: you no longer need a proprietary component model, proprietary language extensions, proprietary modules, etc.

The standardization of the core stack is incredibly exciting and opens the door to a new breed of frameworks: frameworks whose major task is no longer to fill in the gaps in the core stack, but to provide a thin layer of specialized services on top of a standard stack that is now suitable for large scale app development. The benefits are substantial:

Lightning Web Components is the Salesforce implementation of that new breed of lightweight frameworks built on web standards. It leverages custom elements, templates, shadow DOM, decorators, modules, and other new language constructs available in ECMAScript 7 and beyond.

Lightning Web Components provides a layer of specialized Salesforce services on top of the core stack, including:

Combining the Web Components programming model with the Salesforce metadata and services unleashes an unprecedented level of productivity. For example, the code below creates a form component that has a view and an edit model, knows which type of input to use for each field (combobox, date picker, etc), enforces validation rules, and saves changes in the database without server-side code: five lines of JavaScript and five lines of HTML!

With the addition of Lightning Web Components, there are now two ways to build Lightning components: 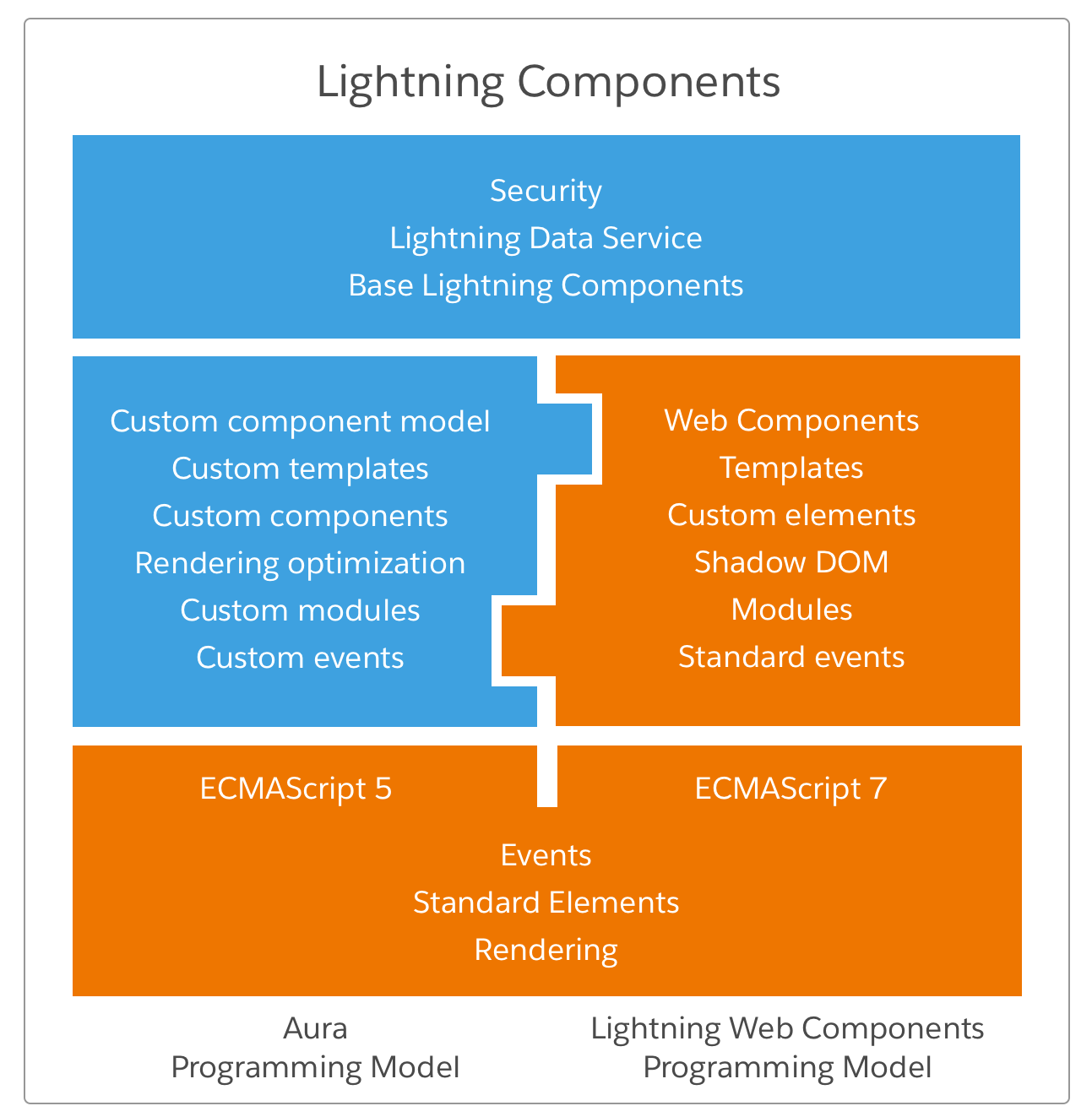 Aura components and Lightning web components can coexist and interoperate, and they share the same high level services:

If you are new to developing on Lightning or if you are starting a new project, we recommend using the Lightning Web Components programming model.

This is an incredibly exciting time to be a Salesforce developer. With Lightning Web Components, you are using a cutting-edge programming model that is built for the 2019 web stack from the ground up and that interoperates seamlessly with your existing code. With the combination of Lightning Web Components and Salesforce metadata, you get an unprecedented level of productivity, performance and… fun! We can’t wait for you to try it, and we can’t wait to see the amazing apps you’ll build!

Experience enhanced productivity with web standards, speed, and a compatible and easy-to-use framework with Lightning Web Components. Join us on January 23rd for our live Global Broadcast and learn more — register today!

Creating with the New Component Playground

April 29, 2019
By Heather Storm
Like our posts?
Subscribe to our blog!
Get notified when we publish new updates.