Whether you actively plan for it or not, dependency management is part of a developer’s everyday work. In this post we’ll present dynamic dependency injection, a technique that allows you to break dependencies and swap service implementations at runtime. We’ll start our journey by explaining how dependencies can become a problem, then we’ll see how to reduce them and how to break them altogether.

When dependencies turn into liabilities

Let’s start with a simple and common scenario and pretend that you have a Client class that needs to use a Service class to perform some operations. The easiest way to implement this is to simply write this in Client:

While this is perfectly valid code, it introduces a dependency between the Client and Service classes. In other words, Client becomes tightly coupled with Service:

You can easily witness this dependency by trying to delete Service. You’ll see that you can’t because Client is using it.

This tight coupling is generally not an issue for small projects but there are a number of factors that can turn it into a concern, such as:

Because of these different factors, you’ll end up having a hard time to develop, test, package, deploy and maintain your code if you don’t adopt a dependency management strategy. Your Apex code will end up forming a huge monolith that you can’t tear apart.

The good news is that most dependency management issues can be addressed by adopting enterprise design patterns such as Service Layer and Domain & Selector Layers as start. However, if you are looking for some some extra runtime flexibility, you will have go further and dive into the world of dependency injection.

Let’s take a practical example and suppose that we have a shipping service based on FedEx that generates a shipment tracking number. We are using the shipping service to send parcels with the following code:

Now, let’s suppose that we want to reuse FedExService in another app or an in another org but we don’t want to impact OrderingService. And, let’s take it even a step further and suppose that a new business requirement dictates we need to support an alternate and optional shipping service such as DHL depending on the account’s country.

With that, we can only implement these business requirements if we break the dependency between the two services. We can’t do that with the current implementation so we’ll need to refactor our code to reduce dependencies.

Reducing dependencies with inversion of control

We can achieve that with a strategy design pattern. The strategy pattern introduces an interface that defines the service and a strategy class that controls which service implementation is returned to the client. This removes all implementation class references from the client class.

Let’s apply inversion of control to our shipping service by implementing a strategy design pattern. We start by creating an ShippingService interface.

Then we add the two service implementations (mocked here for the sake of simplicity):

Finally, we implement a simple strategy: we only use FedEx to for orders shipped in the United States and we use DHL for the other countries.

With that, we have implemented inversion of control. We can use the shipping service without having a dependency between OrderingService and the shipping implementations:

This approach reduces dependencies but we still have dependencies between ShippingStrategy and our two shipping implementation classes. Let’s take it a step further and explore dependency injection to get rid of those dependencies altogether.

Dependencies exist because the compiler needs to know which service implementation classes our client code uses. It needs that because it’s looking for those classes and checking whether they compile. So the question is: how do we get rid of these compile-time checks?

The answer to that question is to use dynamic class instantiation to bypass these checks. In other words, if we only load the service implementation classes at runtime, the compiler cannot establish the dependencies earlier. 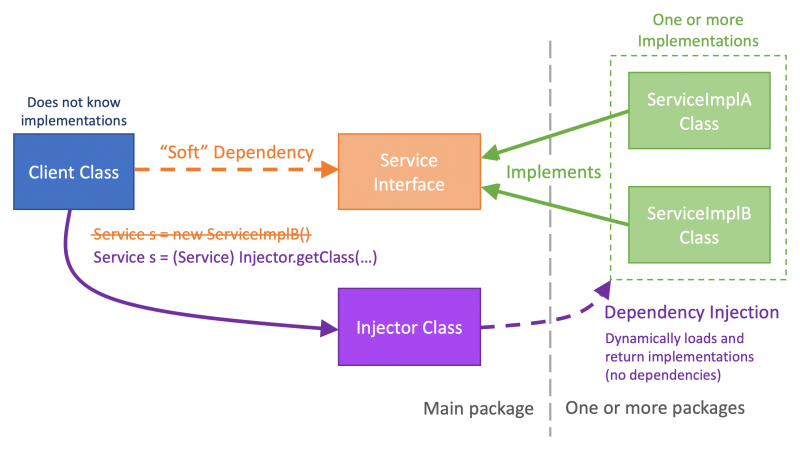 Let’s apply dependency injection to our shipping example. We start by writing a generic Injector class that uses System.Type to instantiate any Apex class from its class name:

Notice that we chose to keep Injector generic so we aren’t directly returning a ShippingService instance but an Object. We’ll cast the returned object as needed when we call our injector.

Let’s now rewrite our account service class to use the injector and instantiate our shipping service implementations without introducing dependencies:

This is a basic example of dependency injection. Notice that we got rid of the hard-coded conditions by introducing a custom metadata type. This allows admins to hot-swap service implementations at runtime with just clicks. This code can run with only one of the two the shipping services deployed (provided that you don’t try to instantiate the missing one of course).

Check out this complete sample project for an in-depth example of how to achieve that.

Here is a recap of the benefits and limitations of Apex dependency injection:

With that in mind, you’ll want to apply dependency injection on strategic dependencies that you need to break but don’t overdo it.

Philippe Ozil is Lead Developer Evangelist at Salesforce where he focuses on the Salesforce Platform. He writes technical content and speaks frequently at conferences. He is a full stack developer and a VR expert. Follow him on Twitter @PhilippeOzil or check his GitHub projects @pozil.