The Salesforce CLI is a powerful command line utility. It decreases the complexity of working with Salesforce orgs for application development and delivery. Source changes between your local project and scratch orgs are tracked by the CLI. This feature is referred to as “Source Tracking“. In this blog post you will learn how source tracking works, in-depth. You can leverage this knowledge to troubleshoot the CLI issues in your day-to-day development cycle.

This is an advanced post and assumes that readers are familiar with building apps using Salesforce CLI. You can get hands-on experience with Salesforce CLI by completing the Trailhead Module here.

Let’s dive into how the source is tracked both in a project workspace and in a Salesforce org. Source tracking functionality can be better understood by breaking it down into the following topics:

Conflict resolution helps manage conflicts between local files in a project and components in a scratch org.

Source tracking on your local machine

When you create an SFDX project, you get a scaffolded directory and a set of files. A few of those files facilitate the source tracking feature on your local machine. The most important being the .sfdx folder.

NOTE – You do not need to look into the .sfdx folder except for understanding this content. The implementation details of the .sfdx folder can change, including names of files and folders. Do not delete any folder or files in the .sfdx folder as they are necessary for the internal workings of the Salesforce CLI (except for log files). Also, do not build any custom sfdx plugins with the assumption that .sfdx folders and files will always exist.

An orgs folder gets created within the .sfdx folder the first time you execute source status/push/pull commands. A subfolder is also created under the orgs folder with a name equal to the username of your user that’s used for authentication. 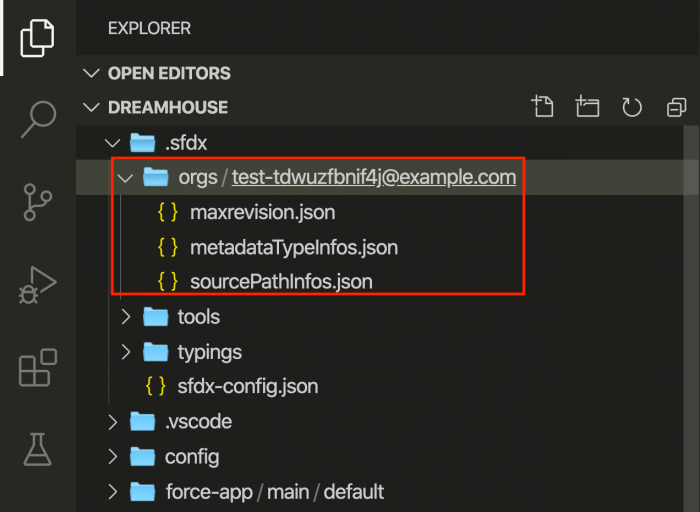 metadataTypeInfos.json contains all metadata types and their definitions. This information is used internally by the CLI. One usage of this file is to generate a package.xml file for the metadata deployment when a developer executes a force:source:push command.

sourcePathInfos.json contains a list of all directory paths, folder paths, and file paths as JSON objects. Each object holds the information listed below as object properties:

This information is used to make sure conflicts between files in an org and your project folder can be properly detected. The file is updated each time you execute source push and pull commands.

maxrevision.json stores the maximum revision value from the last valid metadata pull/push from a scratch org. More details on this are covered in the next section where we discuss SourceMember object.

Source tracking on the Salesforce platform

The Salesforce Tooling API exposes a SourceMember object that logs any changes to the org metadata and settings.

Let’s say you create an object inside your Salesforce scratch org, this change is tracked as a record in SourceMember object with a name of the object. The CLI provides error messages if the metadata data type is not supported for source tracking.

Note: We are working to get source tracking support for all metadata types. This is an ongoing effort.

The below command shows how to query SourceMember records using the CLI:

Note: SourceMember object is continuously enhanced every release to improve source tracking capabilities. We don’t recommend building anything against this object.

To further understand how the Salesforce CLI manages conflicts, let’s explore how source status and source push commands work under the hood.

Source status command lists the metadata that has changed in local package directories and Salesforce orgs since the last time they were both in sync.

When a developer executes the source status command, the following steps are executed.

Some key points to note:

Sync the changes made in your workspace to your scratch org by pushing the changed source to it. To push the source use command sfdx force:source:push

When a developer executes the source push command, the following steps are executed.

The above steps are shown in the flowchart below as well. 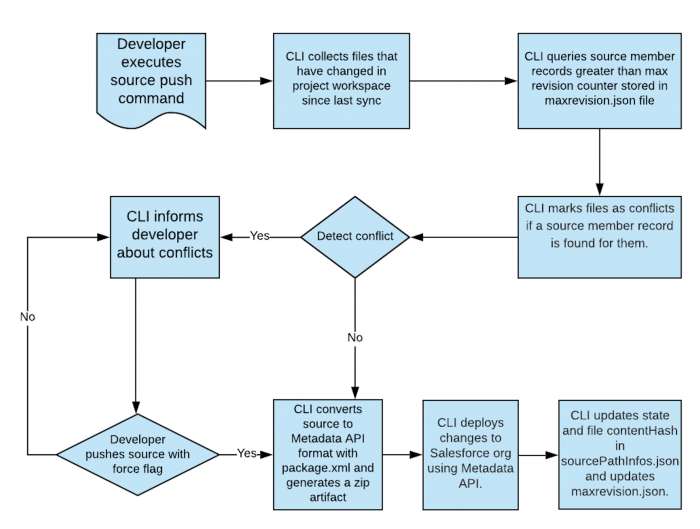 Some important things to note on the source push command:

Source pull command leverages similar logic as discussed above. For more information, explore the source code in the sourcePullApi.ts file.

This section describes tips and tricks to help you troubleshoot issues with the Salesforce CLI in your day to day development cycle.

To display conflicts, make sure to run the sfdx force:source:status command. This helps identify metadata files that conflict with metadata in scratch orgs. This ensures metadata that you have added/modified at the remote and local machine are displayed on the terminal.

To force push or pull, use force flag (-f or --forceoverwrite) to overwrite server files and local files, respectively.

If you are using a non-source-tracked org like a Developer Edition org, you can use the Source Diff (BETA) feature of Salesforce extensions for VS Code to find differences between the project workspace and the org.

To exclude source files from the sync between the workspace and the Salesforce org, use .forceignore. This file has similar functionality as .gitignore. You can indicate which source to exclude by specifying glob pattern matching. The details on where to put the .forceignore file and patterns are covered in Salesforce DX documentation.

If you think some metadata type is breaking your workflow as it’s not supported yet for source tracking, you can track them separately by keeping it in a separate folder and listing it in the .forceignore file. 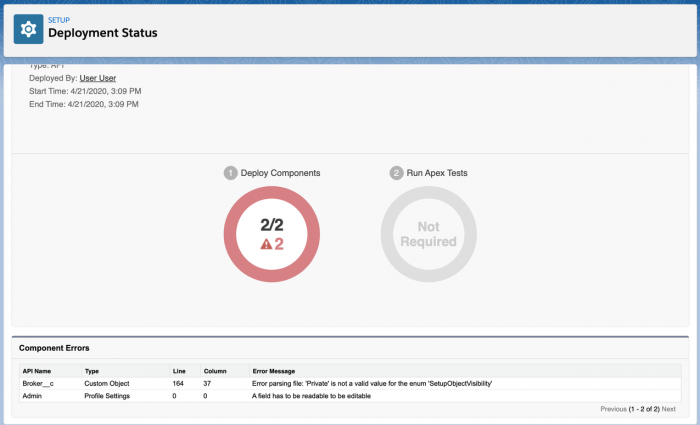 Salesforce CLI application code is written in TypeScript for Node.js runtime. During the execution of commands, if you encounter Node.js errors you can troubleshoot by inspecting logs.

Salesforce CLI allows you to set log levels for commands. The default level of log messages is warn. You can set the log level to one listed here. Log levels are in order of least to most information.

You can collect more log info by using –loglevel flag. As an example, execute sfdx force:source:push --loglevel=trace to collect logs while the source push command is executed.

If you are on macOS, then open the log file using the below command in the terminal.
open -a TextEdit $HOME/.sfdx/sfdx.log

If you are on a Windows machine then open the log file using the command below from your command prompt terminal or powershell.
start .sfdx/sfdx.log

When you are raising a ticket with support or creating an issue in the git repo of the project, we normally request trace logs. You can obtain trace logs for commands right within your terminal by typing the command followed by an added argument --dev-debug. For example, if your force status command is failing, get the trace logs in your terminal by typing sfdx:force:source:status --dev-debug

To retain the metadata and package.xml file when source push/pull or source deploy/retrieve commands are executed, set an environment variable named SFDX_MDAPI_TEMP_DIR

To set this environment variable on macOS, follow the below instructions.

To set this environment variable on a Windows machine, follow the instructions listed here.

It’s a good idea to check and make sure SourceMember object records in scratch orgs are created properly. Use the tooling query against scratch orgs to see all SourceMember records and verify that their revision numbers, changedBy, MemberType and MemberName fields are properly populated.

For example, you may run into a problem where a change on the server doesn’t show up in source:status or isn’t pulled down with source:pull. The first thing to do is to query the SourceMember object record for the component you changed. Check to see that it exists and that the RevisionCounter and RevisionNumbers have incremented. If not, there’s a server issue causing the change to not be tracked. If this is the case, it’s likely an issue on the CLI side.

Hopefully, this post has given you enough information about how Salesforce source tracking works for scratch orgs. One advantage of the source tracking feature of scratch orgs is that it automatically tracks source changes for you so you don’t have to maintain a package.xml file in your source control. Also, you do not have to remember the components that you have changed when building apps.

Check the Salesforce DX Developer Guide for known limitations and workarounds. If you think something is not working as expected, log an issue in the Salesforce CLI GitHub repository.

Mohith Shrivastava works as a Senior Developer Evangelist at Salesforce. He is currently focusing on the Salesforce CLI, Platform Services, Communities, and Lightning Web Components. You can follow him on Twitter @msrivastav13

Slim Down with the New Bulk API v2

June 17, 2020
By Christopher Marzilli
Like our posts?
Subscribe to our blog!
Get notified when we publish new updates.