Every year the Ecma International Technical Committee 39 (TC39), which Salesforce is a member of, releases a new edition of ECMA-262, the ECMAScript Language Specification standards, which JavaScript is based on. The next edition is ES2021 (ES12), which is currently in draft and planned to be released in June. Browsers, compilers (such as Babel and Typescript), and runtimes (such as Node.js) work hard to keep up-to-date with ECMAScript standards by implementing support for newly added features. Continue reading to learn about some of the newest and coolest ECMAScript features and how you can use them in Lightning Web Components.

To understand the implications of using certain ES6+ JavaScript features in LWC, it’s important to unfold how the LWC compilation process works. When you push or deploy LWC files to the platform, several tasks are performed.

First, we run a linter that scans your code using the base configuration from our LWC Eslint plugin. This prevents common pitfalls with LWC, and enforces other Salesforce platform restrictions. Note that this is different than when the linter runs locally in VSCode. In VSCode you can choose which linting configuration to use: more or less restrictive.

Then, we compile the code that you’ve written. The LWC compiler uses Babel and Rollup to accomplish this task. This process entails three steps: parsing, transforming, and bundling.

Then, the code is transformed to generate two different outputs:

Both outputs also include the compiled template and CSS files, that are bundled using Rollup. The template file is compiled because the component DOM is generated dynamically in JavaScript. The CSS file is transformed to scope styles to the component when using synthetic Shadow DOM. 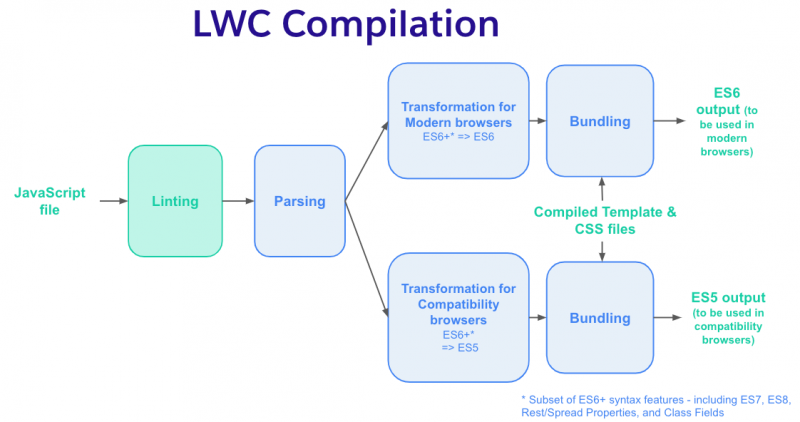 What happens if you’re using a syntax feature that we don’t transform (for example, the optional chaining operator from ES11)? If the parser understands it (it usually does, since we upgrade it often), the feature is included in both code versions, and it works only if your browser is able to understand the syntax (often the case for modern browsers).

Note that this landscape is correct by the blog post publication date. However, it may change soon, as the LWC team is working on adding new transforms to keep up with newly introduced syntaxes.

Now let’s talk about runtime execution. When your application runs in a browser, we use the user agent to detect which browser. Depending on the browser, the ES5 or ES6 version of the code is loaded, along with the required polyfills in the case of compatibility browsers. A polyfill is a missing feature (typically an object or method in the browser API) that’s added to the language at run time. Note that these are different than syntax features. Some examples of features that can be polyfilled are Promise (ES6), Object.entries() (ES8), and Promise.any() (ES12). LWC uses core-js polyfills. 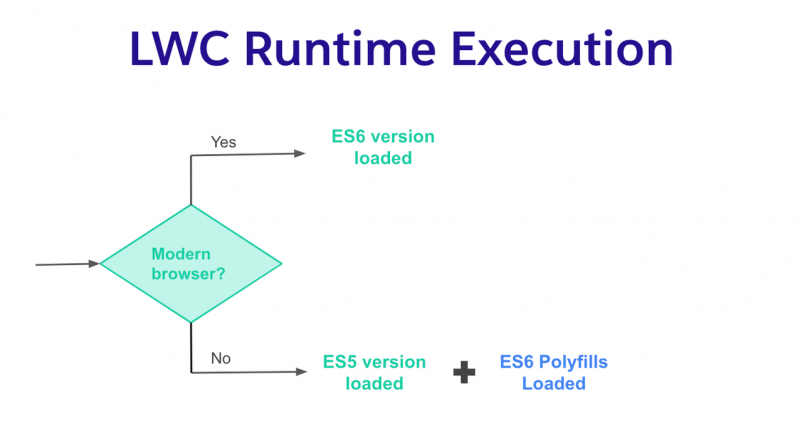 So, what happens if you use an API for which we don’t provide a polyfill (for example, Promise.any() from ES12)? It works if the browser in which you run the app supports it, as long as Locker supports it as well.

Note: for LWC OSS only the ES6 version is generated by default. Also linting and polyfilling are not part of LWC OSS out of the box.

The newest ECMAScript standards include features that will make you much more productive, and your code more efficient and easy to read. You can use most of them in LWC, given that they’re supported by the browsers in which your app runs. This is not different from what happens with regular JavaScript applications!

These are some of the most recent features that you can use as of today:

I created an app that makes it easy to understand which ESXX features can be used in LWC, given they’re supported by your browser, and how. The app contains components with code examples that showcase features included in versions from ES9 to ES12, although remember that features from previous versions are supported too. You can look at the code of each example, and optionally debug each example individually with the browser developer tools, for a deeper understanding.

I also created an LWC OSS version of the app, because when you create apps with LWC OSS, Locker doesn’t run and some restrictions are relaxed so you can use more ESXX features that the Salesforce platform supports. I recommend that you clone this version if you usually develop LWC outside of the platform.

In this blog post, I explained how the LWC compilation process works, how we provide a backwards-compatible version of your code, and how we polyfill missing features (ES6, and some from ES7 and ES8) for older browsers. You also learned that you can use most other ESXX features, as long as you’re using a browser that supports them.

To help you find out which ESXX features fall under each category, I’ve shared two apps that show you the supported features and how to use them. Clone the LWC app or the LWC OSS app and check them out. And if you want to learn more, know that I’m doing a webinar series on Trailhead Live about this topic starting Thursday February 25 – make sure to add it to your calendar. Thanks for reading and happy coding!

Trail: Learn to Work with JavaScript

Alba Rivas works as a Lead Developer Evangelist at Salesforce. She focuses on Lightning Web Components and Lightning adoption strategy. You can follow her on Twitter @AlbaSFDC.

January 25, 2021
By Eric Lessard
Like our posts?
Subscribe to our blog!
Get notified when we publish new updates.