In the Force.com Zone during Dreamforce we hosted an event on Wednesday evening designed to get developers going, network and have a good time… the Second Annual Hackathon.

I got my first inkling on how the event was going to go when I caught sight of crowds lining up outside our stanchions as we set up and briefed the staff. Surely they weren't all here for the hackathon? …THEY WERE!!

Dave Carroll, aka 'DevAngel' served as our MC for the evening, announcing the contest structure within the Mission:Impossible theme:

As soon as we hit Go Time, contestants furiously launched into building their applications. Early on, we ran into our first snag — the local access point was becoming overloaded and contestants were having a hard time staying on the network. Eventually, enough people moved over to the wired network in the Immersion Lab, easing the load and allowing the competition to continue at breakneck pace.

As we proceeded, Jon Mountjoy made sure to give out baseball caps to our contestants, and hackathon-specific t-shirts as well. A nice buzz developed within the audience, which included a lot of people just hanging out and watching the competition unfold, enjoying a little food and a beer. In all, we estimate more than 300 people spent time at the hackathon, and we had about 30 contestants to start.

Eventually, our two hours were up; several iPods were given away to lucky-draw winners in the beginner pool. Our staff scouts reported back on a selection of finalists at the intermediate and advanced levels, and each finalist came up to the podium, and gave a brief overview and demo of what they built.

Here are the intermediate level finalists: 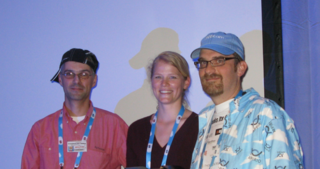 From left to right we have Duncan Stewart, Jennifer Knight and Joe Krutulis.  Joe, together with fellow coder James Eitzmann, won the intermediate level. Joe walked away with a nice and shiny Dell Alienware M15x!

The advanced level finalists produced some awesome work – here they are: 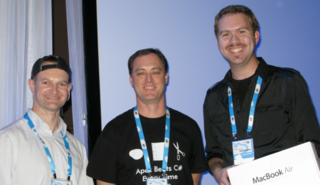 From left to right we have Stephen Brown, Jeff Douglas and Colin Loretz.  Colin won the advanced level – grabbing a nice MacBook Air in the process!  He built a super cool Basecamp integration.  Runner up Stephen built a mashup with the Amazon fulfilment web service, and Jeff with Twilio.

Congratulations to our winners, runners up and of course, to everyone who participated! We are looking forward to next year's exciting competition.

Cloud to Cloud Integration webinar on 5/24

Force.com in the Classroom – UC Irvine

May 13, 2011
By Pat Patterson
Like our posts?
Subscribe to our blog!
Get notified when we publish new updates.