VMforce – Every Java Developer is now a Cloud Developer!

Without a doubt the VMforce announcement is big. Amazing technology like the Force.com platform, virtualization, and Spring make VMforce possible. But it is also about people.

Without a doubt the recent VMforce announcement is a big deal. Salesforce.com and VMware have managed to pull off something that plays to the strong points of both companies, and in VMware's case, also highlights how strategic the acquisition of SpringSource was (I suspect the same can also be said about Salesforce.com's definitive agreement to acquire Jigsaw). Amazing technology makes VMforce possible.

But VMforce is also about people.

There are an estimated six million Java developers around the world, many of whom use Spring. That's a LOT of raw power! Now, I am not talking about the raw power companies can save by moving their apps, and servers to the virtual machines, the cloud etc. I am talking about the power of developers to build next generation apps that are collaborative, social, locale aware, and mobile. Cloud 2 is here.

Take the situation from an IT management perspective. You may have five, ten, a hundred, or thousands of staff already building Spring apps. Your CIO is eager to leverage the power of the cloud. She recognizes the value of retiring servers, and reducing the cost of keeping the lights on. It is your job to make it happen.

What do you do with all of your existing developers? Retrain them? Hire new ones? What about the existing apps that will never make it to the cloud? As an IT manager, you can't forget those apps, that's for sure! It's a people problem, technology just happens to be the currency of trade.

If I, as an IT manager, can take my existing developers, with their existing skillsets, and make them more productive by utilizing vmforce and the services provided by the Force.com platform, I have effectively solved my people problem, and in many cases, greatly improved it: those apps that I have now been able to move to the cloud, no longer need dedicated admins to monitor and maintain them, which allows me to re-allocate those people to other activities, plus leveraging the Force.com platform, developers have access to enterprise collaboration with Chatter, ability to make your app mobile, and analytics—all of which would take time and effort to build in Java, or any other technology. And, of course, all of this is in addition to the ability to build Force.com apps using Visualforce and Apex. If technology is the currency, VMforce may well be IT's version of the Euro—no more uncertainty due to fluctuating exchange rates! 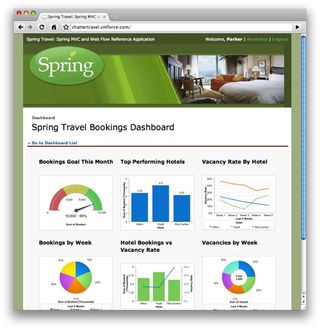 Anshu Sharma's blog nails it when he asks "Why does VMforce matter?" and answers the question from multiple stakeholders perspectives. Parker Harris's post makes the point even more succinctly: it is about "simplifying IT".

Every Java Developer is now a Cloud Developer!

Hello AppQuest. This is Chatter.

September 1, 2010
By Quinton Wall
Like our posts?
Subscribe to our blog!
Get notified when we publish new updates.