Winter 11 is just around the corner. One of the most requested features from the development community was a set of Chatter components. You asked for it, here they are!

The Winter '11 release is just around the corner (Have you signed up for the webinar yet?) and one of the most requested features from the developer community is here: Visualforce Components for Salesforce Chatter. Create your Visualforce page, drop a component on the page, and you have your feeds, followers, and who you are following show up with a single line of code. The rest—the creativity—is up to you!

Two usage notes to keep in mind when using the new Chatter components:

1. The components will not render Chatter information if displayed as a Force.com Sites page.

2. You can only add a single Chatter Component per page. 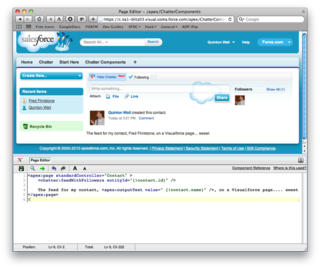 Here are a list of the Chatter Components currently supported. They are very simple to use, just pass in the entity id of the record you want to display and you are off and running!

<chatter:feeds> Displays the Chatter feed on a record

<chatter:feedWithFollowers>: An integrated UI component that displays the Chatter feed on a record, as well as its list of followers.

<chatter:follow>: Renders a button for a user to follow and unfollow a Chatter record

<chatter:followers>: displays a list of Chatter followers for a record.

In addition, the <apex:detail> component has been updated with a new showChatter attribute, which specifies whether the record should render as a Chatter record (display the show/hide bar etc) or not.

Chatter for Developers Webinar 2/24 – listen, learn, and share your app with us!

February 2, 2011
By Quinton Wall
Like our posts?
Subscribe to our blog!
Get notified when we publish new updates.