Day One of SpringOne was the first day Developers could get hands on with VMforce. The lab was packed as everyone wanted to try the Spring Roo support for VMforce. Check out the video here.

Today was the first day of SpringOne, and the first day developers could get their hands dirty with VMforce in the VMforce Lab. I have never been to a SpringOne event before, and was impressed by the buzz, and excitement. It reminded me of the early JavaOne conferences with Gosling peppering the crowd with his t-shirt launcher cannon, "in a world with no fences, who need Gates T-shirts, and the Star7 was still oh-so-cool (ok, well it still is). Ah, those were the days…..

But, those days of excitement are far from gone! 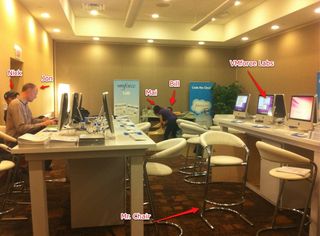 After setting up the labs, Reid and I flaming each other with bad pics on Twitter, Jon stealing computer monitors, organizing the room, and stocking the candy bar, we were ready to welcome the eager attendees into the coolest setup I have seen for a long time. The pic here is before the blue lighting was switched on, but it should give you a taste of what was to come. Within the first five minutes, all of the 12 lab machines were crowded with Spring Developers deploying apps to the cloud with VMforce.

Tomorrow (or probably today by the time you are reading this), is VMforce day where we will be presenting a bunch of new material on VMforce, more deep dives on use cases, some cool demos, and plenty more. One of the biggest things we are announcing is that Spring Roo now supports VMforce!

Sometimes it is easier to let a video do the talking….

Get Ready for VMforce with Upcoming Webinars

May 19, 2010
By Quinton Wall
Like our posts?
Subscribe to our blog!
Get notified when we publish new updates.