Would you use a Salesforce TextMate bundle?

What if there was a TextMate Bundle for Force.com development? Would you use it? Would you contribute to it?

I use TextMate almost exclusively to code in these days. The huge choice of bundles makes it an invaluable tool for any language or platform. I had been toying around with the idea of making a bundle which supports Visualforce and Apex for a while, even considering adding a bunch of the cookbook recipes as snippets, and perhaps even syncing with the cloud. 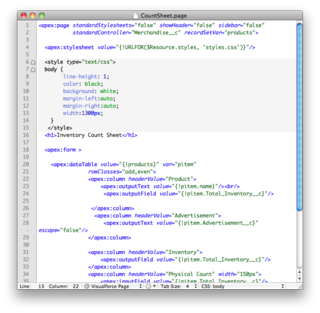 I was reading through the Q&A of last Tuesdays Spring 11 preview webinar. There were at least half a dozen questions asking whether some of the screenshots of the code samples had come from TextMate. For me, this was the final straw—there are obviously plenty of developers out there writing apps for Force.com that also use TextMate. I suspect with the Heroku acquisition, the interest in TextMate within the Force.com community will only increase.

But you know me. Actions speak louder than words. And Youtube videos shout it!

Think such a bundle would be useful? Would you help contribute to it if I started a GitHub project? Let me know by leaving a comment here, message me on twitter with the #sfdcbundle hashtag.

June 22, 2010
By Quinton Wall
Like our posts?
Subscribe to our blog!
Get notified when we publish new updates.