A brief history of Ruby and Rails with the Force.com platform

Last nights Force.com developer meetup was a blast. Not only did we cover an intro to the Force.com platform, REST and Ruby, it gave me an opportunity to highlight some of the history of Ruby and Rails with Force.com. For many, this was quite an eye-opener. A PDF copy of my presentation is also attached to this post. 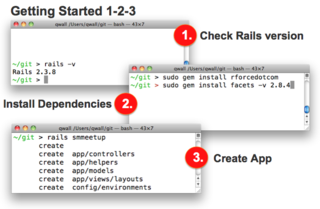 Last night's Developer Meetup was a bunch of fun. Where else can the night start with a broken demo that I had to scramble to debug whilst friends heckled via tweets (is that called tweckling?), Pat unraveling the path to the cloud in the Intro to the Force.com track, and Sandeep expertly presented the ins and outs of the new REST API. I even managed to bust out Vi as part of my demos. Don't know about you, but that alone ranks high in my books (ok, well maybe I need to get out more)

Demo fixed, it was my turn to present and talk about Ruby, Rails and the Force.com for Ruby Toolkit. For many of the attendees, they were new to Ruby and Rails, having heard a lot about the language and community since Salesforce announced the Heroku acquisition. For others who already work with Ruby, I wanted to show that some of us have been using Ruby and Force.com for quite a while having long been drawn to the elegant simplicity of the language (I was an Eiffel guy a long time ago and was drawn to that language for the same reasons — I firmly believe good technology should not get  in your way of delivering a solution; the cloud, Force.com, Heroku and ruby certainly achieve this).

To keep this blog short, here is some interesting facts about Ruby, Rails and Force.com you may not have known:

1. The Force.com SOAP API was originally released in 2004

2. In 2005, RForce, a gem which provides a binding to the SOAP API was developed by the Ruby community and made available (yes, that's over 5 years ago!)

3. With the rise of popularity of Ruby on Rails, the Ruby community again stepped up and in 2006 developed the active-salesforce gem to provide a active-record connection adapter to Salesforce. To date, the gem has been downloaded over 20,000 times and in the first half of February alone, there were just north of 400,000 API calls to the Force.com platform made via active-salesforce!

4. Fast forward to 2010, and the Force.com for Ruby Toolkit, built atop the active-salesforce adapter, was released. Again, this toolkit was developed almost entirely by Ruby community members.

5. 2011 – Here we are, and we are already looking at the next version of the toolkit. With the release of REST API for the Force.com platform, we have a great opportunity to continue to grow Ruby and Rails support. In fact, Ray Gao, the original developer of the Force.com for Ruby Toolkit has already released an alpha version of a gem which supports Rails 3 and REST. It is definitely worth checking out!

It is pretty clear. The theme is the same — Ruby has such a strong, active, and passionate community who have continued to drive innovation on the Force.com platform for over 5 years. With the well deserved increase in focus on Ruby within the tech space, I only see this pace of innovation accelerating. And that certainly is a good thing!

Hats off to the Ruby and Rails developer community. You guys rock.

Finally, here is a pdf copy of my slides from last nights presentation at the San Mateo meetup. I will also post all of the code from the sample app soon too. If you are looking at using the Force.com for Ruby Toolkit, you should find some pragmatic advice for getting up and running quickly!

All I want for Christmas is Developer Productivity Apps

September 6, 2010
By Quinton Wall
Like our posts?
Subscribe to our blog!
Get notified when we publish new updates.