Chatter for Developers Webinar 2/24 – listen, learn, and share your app with us!

Chatter for Developers webinar on 2/24 - Learn new Spring 11 features, tips, tricks, cool demos, using Chatter from Ruby, and sharing your cool chatter apps by posting a video and tweeting it with the #chatterwebinar hashtag. Register now!!

If you have been developing Chatter apps over the past three releases (yes, Chatter has only been available as a GA product for three releases!) you may have noticed an increasing number of ways you can customize Chatter, and build your own social collaboration apps. Spring '11 contains some amazing new additions to the Chatter developers toolkit including triggers on FeedItems and FeedComments, as well a bunch of data model and API changes. 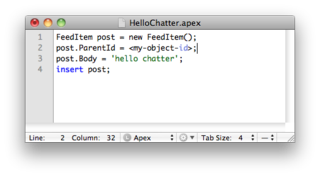 Next Thursday February 24th, Rob Woollen, Platform CTO—and the original Chatter architect—and I will be hosting a Chatter for Developers webinar where we will be taking a look at all of the Spring 11 changes, sharing some insights into where custom Chatter application development is going, tips for writing efficient Chatter code (and yes, we put some of them to the test – I couldn't help myself!), and, of course, some cool demos including keyword filtering, and using Chatter in your Ruby apps.

So, if you are new to Chatter development, or a veteran, there is plenty of code, conversation, and tips for working with the new features of Spring 11. Come join us next Thursday; the first webinar is at 7am, followed by a repeat session at 10am. Spread the word — after all this is a webinar about social collaboration, we should be able to tweet, and post this from San Francisco to Shehezi and everywhere in between.

Go ahead and register now. To help build some participation, and make this a true collaborative webinar, I would love to highlight some apps from the community. If you have an app to share which uses some of the new Spring 11 features for Chatter, post a short video to twitter and use the #chatterwebinar hashtag!!!)

Let's make this the biggest, most #awesome webinar of the year!

Tweet ready post to save you time and let you get back to building all those cool Chatter apps:

March 3, 2010
By Quinton Wall
Like our posts?
Subscribe to our blog!
Get notified when we publish new updates.