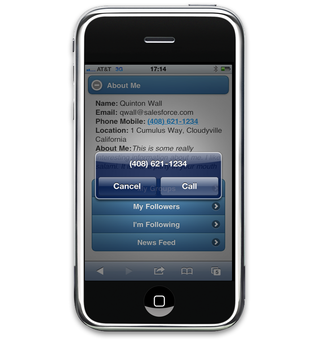 It may be still snowing in Tahoe, but the Summer of APIs is blazing along. This weekend I put the finishing touches to the Chatter REST API Getting Started guide and now it is time to begin prepping for the developer webinar Logan Henriquez, Chatter REST API PM, and I will be presenting on on June 28th. Make sure you sign up early!

Some of us have been playing with the Chatter REST API for a while now through the early access program and had a taste at how much easier it is to interact with the Chatter feed including News Feeds, User information, and even pagination!

Take for example, if I want to retrieve my entire news feed, comments and all. If I was writing an iOS app, my code might look something like this:

When I first started looking at the Chatter REST API I focused on the code and the optimizations it brings to developers. Code and open connectivity is an enabler; It's an explicit requirement as I mentioned on Friday (which btw, the follow up post is coming). I read an interesting article over the weekend about Facebook's growth in social ads, and how it will likely surpass Google's ad revenue. Of course, during the webinar, we are going to crack open some code, but we are also going to talk about a few new business models for the social enterprise that the Chatter REST API enables.

So, sign up early, come with your questions and happy coding!

Objective-C code samples for common Force.com and iOS use cases

April 26, 2011
By Quinton Wall
Like our posts?
Subscribe to our blog!
Get notified when we publish new updates.