Next weeks Chatter API Developer Webinar is going to contain a LOT of code and some cool sample apps. One of the features we will be discussing is a feature called Message Segments which allow you to write come code to dynamically create UI on any device.

I am back from a weeks PTO, rested (pun intended) and ready for next Tuesday's Chatter API Developer Webinar (Have you signed up yet?). I just finished the presentation and demos for the webinar, and before I left on vacation, we launched the Chatter API page which contains links to lots code and a getting started article covering samples using the Chatter API in Java for Android, Ruby on Rails, Javascript, and Objective-C. 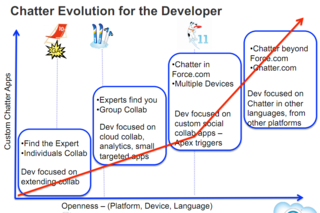 Oh, and in case you haven't noticed—every developer edition org has the Chatter API already enabled!

If you happened to attend the Chatter Deep Dive webinar I presented with Rob Woollen a few months back, one of things I discussed was how the trend for Chatter was moving beyond the Force.com platform. The Chatter API is a great example of leveraging Chatter for custom apps on any platform or device. I'm building a few surprises for Dreamforce, and would love to see what custom apps other developers are cranking out.

We will be covering a bunch of the features and use cases for the Chatter API during next weeks webinar with some cool demos, but I wanted to call out one of the unique features of the API I have not seen in other social APIs, called Message Segments. Here is a snippet of a JSON response containing a Message Segment. 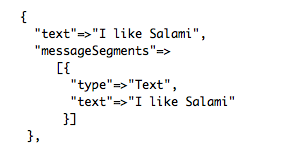 The Message Segment is included in JSON responses that contain posts or comments and identifies the post type (if you want to learn more about Chatter post types, check out the Introduction to Salesforce Chatter article which contains more information as well as a good discussion on getting started developing custom Chatter apps). Understanding the post type is super helpful when you want to construct your own UI for say a custom mobile Chatter API, or a web mashup that allows internal staff and external customers to interact on a website etc. By having the API respond with meta information about the post, I can dynamically generate some cool UI.

Make sure you join the webinar next week for some examples of some custom apps using the Chatter API.

The secret to Mobile development success in the Cloud

March 18, 2011
By Quinton Wall
Like our posts?
Subscribe to our blog!
Get notified when we publish new updates.