The Chatter REST API is GA in Winter '12. Here is a highlight of some of the recent changes and additions. 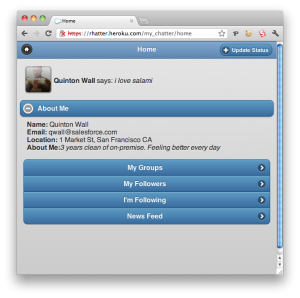 With Winter ’12, the Chatter API will be GA. The pilot program has been a great success, especially to gain feedback from the community. Here are a few highlights of some of the important changes. A full list is included in the release notes. I’m going to try to carve out  some time to work on https://rhatter.heroku.com (source code is available here) to add some of the new features to make this a great HTML5 app for Chatter.

Update to the /users resource:

/chatter/feeds/people/me – returns a URL to the feed-items for all the people the user (me, in this instance) is following

Specify response type as part of the resource, rather than in headers:

Many of the response bodies have been update to include additional Chatter information such as total number of likes, comments, whether the user is a Chatter guest etc.

The items above are only a subset of the changes and additions to the Chatter REST API. I suggest you check out the release notes, and developer documentation for more information. And also don’t forget to tune in for this weeks Winter ’12 release webinar.

June 24, 2011
By Quinton Wall
Like our posts?
Subscribe to our blog!
Get notified when we publish new updates.