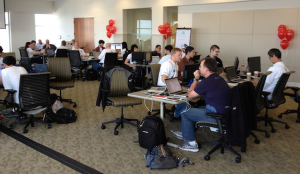 Hackathons are all the rage – we’ve run them regularly at events such as Dreamforce and Cloudstock, and there was even an article in Wired recently chronicling the results of throwing several teams of developers, designers and other interested people into a room for a couple of days with the goal of creating the next big app. Some hackathons are purely social events, others are sponsored by technology vendors, but a few are internal contests, run by companies as a fun way to expose their employees to new tools and methodologies.

Last week, Dave and I attended a hackathon at Dominion Enterprises, in Norfolk, VA. Although the name ‘Dominion Enterprises’ might not be familiar to you, you’ve probably seen or visited some of their many print and web publications connecting buyers and sellers. Last week’s hackathon, the third that DE have run over the past few months, brought together more than 50 DE employees with eight students from four colleges and universities in the Norfolk area to build apps on the Heroku platform leveraging APIs from Facebook and DE’s own online services.

Starting with a blank slate on Thursday morning, the ten teams spent the next two days in intense focus, getting to grips with hitherto unfamiliar technologies such as Sinatra, the Facebook Graph API and HTML5 Canvas. Dave and I spent our time coaching developers on Heroku and the Facebook APIs; it was great to see everyone getting out of their comfort zones and really stretching themselves. By the time the closing bell rang at 3pm on Friday, each of the teams had built and deployed a functional, and in some cases, highly polished, social application. ‘Best in Show’ went to ‘Plan & Post’, a very polished tool for managing birthday greetings, with other prizewinners presenting innovative social takes on finding places to live and work. 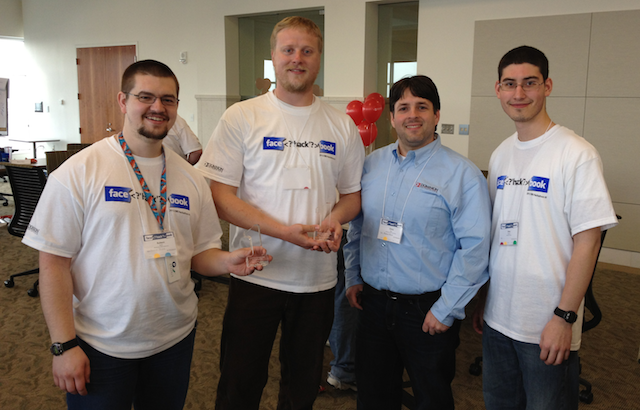 At the end of the event, though, it wasn’t so much about taking home the lucite as spending two days making new friends, learning and having fun in equal measure, exploring new technologies in a low-risk environment. Joe Fuller, Dominion Enterprises’ CIO, explained to me how the hackathon idea had germinated and taken root at DE,

The parents of the DE Hackathons are Brian D. Smith, Web Development Manager and Melodi Albert, VP of Management Development and Training. Brian knew hackathons would bring energy and fun to the sometimes routine programming tasks performed by our developers and Melodi agreed hackathons would help retain and attract good employees. Brian also felt that hackathons were one of the best ways to expose programmers to new tools and methodologies because they were compressed and fun. I became the executive champion, talking up the hackathons to senior management and attending all the planning sessions and the events themselves. Our first hackathon exposed our internal APIs, the second focused on Google APIs, and this last one centered on the Facebook APIs. All of them achieved the multiple goals of having fun, learning new tools, collaborating with people outside your inner circle and keeping up with trends in online marketing. There have also been a couple of ideas worth incorporating into our regular business lives.

If this has captured your imagination and you’d like to find out more about the mechanics of running a hackathon at your company, feel free to email Melodi and she’ll be happy to share DE’s experience.