In general, developer meetups are a great place to sync up with community members, meet industry leaders, exchange views and ideas, socialize with peers, network with others and in general, have a good time. But for me especially, it was a life changer!

Until the day I attended the developer meet in Noida, a suburb of New-Delhi, India I always wondered whether I will ever be able to attend a developer meetup. And finally the day arrived when this turned into reality. I came to know about the developer meet being held in Noida and instantaneously got an email from Kavindra asking if I will be able to participate in the event as a guest speaker. To be honest, I’m not a professional speaker; in fact I have never addressed a group of larger than 10 people. I obviously did not want to miss this opportunity and at the same time I was a bit nervous due to stage freight. I exchanged a few emails with Kavindra / Josh and it was decided in a jiffy that I am going to present my views in the event, along with my respected friend and mentor, Abhinav Gupta, who is the first Force.com MVP from India, and is otherwise better known as <Tech> Germ in the SFDC world!

Being a developer, I had been extremely busy with my work till the day of the event I hardly got a chance to prepare except for a small presentation which I could walk the audience through. The event was scheduled to start at 6PM in the evening, so I started from my home town (Jaipur) in the morning at 8 AM by car hoping to make it on time as the distance I had to cover was over 300 KMs! Believe me or not, every KM travelled and every minute spent on the way to attend the event was worth it and there has not been a better experience in my life than this one.

I reached there around 3 PM and met Kavindra, with whom I spent a couple hours discussing things in general and exploring possibilities to start user groups in specific regions. It was truly a memorable experience interacting with him. After our discussions, it was time to formally commence the event. The venue of the event was Navatar headquarters and I extend my sincere thanks to them for taking the initiative to organize this event and Salesforce.com arranging for beer and delicious snacks. The event registered attendance of 100+ people turning up from various places and I was pleasantly surprised to see that several others had traveled long distances to witness it live.

The event began with introduction by Saurabh, New Delhi Salesforce Platform Developer User Group Leader followed by Kavindra’s presentation, which was focused around the current community size and growing Indian community at an exponential rate (for which he and Josh had specially come down to India). The presentation received a very good response. Once he was done, it was my turn. By that time, my nerves had already settled after a long conversation with Kavindra and other fellow community members before the start of the event, and I was at ease, or at least I thought so. 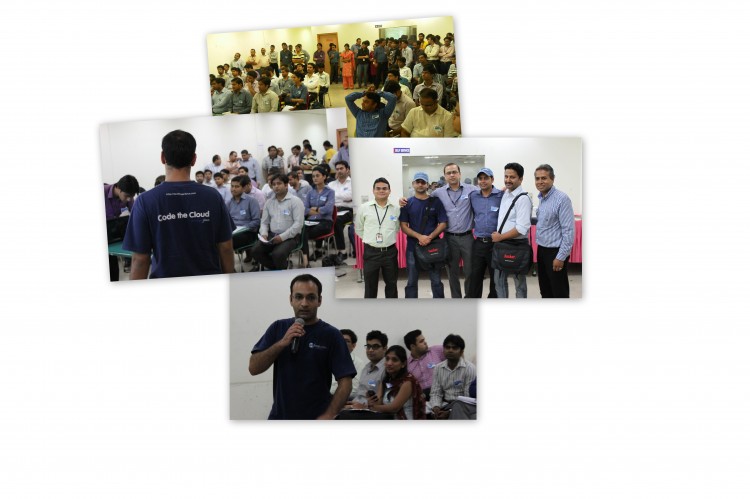 When I started, stage fear immediately crept in and I did not know what to speak but the moment I saw the first slide of my presentation on “Community Contribution”, I knew where to start. When I finished, I was amazed that I spoke non-stop for about 25 minutes and there were several occasions when audience expressed good interest through several rounds of applause. I talked about my journey of becoming a Force.com MVP from being just another SFDC developer and the platform and benefits the title provides.

Later in the evening, Abhinav presented a highly technical session, which too received a good response from the audience. I would like to quote his words from his blog post so you will understand why am saying his session was highly technical – “My goal was to show how easily one can develop a RESTful web services backend for a mobile application in Force.com platform within a few mins. So we ended up developing this RESTful backend for a small “Developer Meetup” Mobile application, this application tracks developer events and attendees participating in the events.” Would you not agree now? His presentation certainly left the audience wondering about various other possibilities and gave them a food for thought.

Abhinav’s session was followed by the organizer’s concluding (Navatar’s) presentation where they presented their product developed on the Force.com platform.

No developer meetup can be complete without giving a chance to the audience to participate and win a few gifts. So after the sessions were over, Kavindra organized a quick Cloud Trivia and audience had a chance to grab great stuff like T-shits, Caps, Jambox, Heroku books, and lots more. Unfortunately, MVPs were asked not to participate and we missed the chance to receive the goodies. But Kavindra has been kind enough to promise that he would send them as soon as he reaches US — hope he keeps it.

In all, it was a great opportunity to connect with people, improve social circle, feel like a celebrity (people made me feel like one when they requested to get a smiling photo clicked with them), and discuss and explore opportunities to organize similar events in my home town (Salesforce Platform Developer User Group- Jaipur)  in the future. And the best part – it brought out the best in me, am now much more inclined and motivated to expand my circle and conduct more such sessions, increase awareness about the platform. I look forward to becoming a platform evangelist now, keeping my fingers crossed!

Extending my sincere thanks to Kavindra, Josh, Quinton, Abhinav, Saurabh, Navatar and all other people involved for making this event happen.

Videos from the Developer Meetup

August 2 Intro to Force.com Bay Area Meetup is On!

July 25, 2012
By Samantha Ready
Like our posts?
Subscribe to our blog!
Get notified when we publish new updates.