It's always hot in the summertime, and Ryan and I tried to heat it up a notch by spreading the word on all the new things coming out in the Summer '13 release. If you missed it but you want to see the full show, you can find the recording on youtube. We covered a lot out of the release notes in a little less than an hour, but I'll give you the cliff's notes version here. 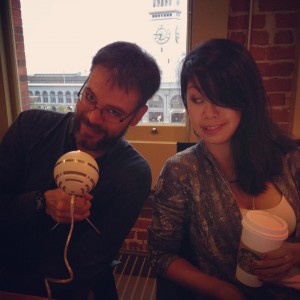 It’s always hot in the summertime, and Ryan and I tried to heat it up a notch by spreading the word on all the new things coming out in the Summer ’13 release. If you missed it but you want to see the full show, you can find the recording on youtube. We covered a lot out of the release notes in a little less than an hour, but I’ll give you the cliff’s notes version here.

The Analytics API is the best kept secret on the Summer ’13 menu. The Analytics API gives you programmatic access to the reporting data you create, using the standard report builder. It is currently in an invitation-only closed pilot, but the full release is just around the corner. Think of the Analytics API as an extension to reports and dashboards, the same way Apex and Visualforce extends your ability to configure layouts using the page layout editor. This is a game changer for your Salesforce data. How is the Analytics API going to revolutionize the way you visualize your data?

1. Efficiency. It uses REST, and grabs your data and metadata. From there it can dynamically refactor the response results to reflect whatever column values appear in your report (meaning NO hardcoding query values). You’ll be able to build out the structure and UI for your charting applications while your admin builds reports in parallel. If they add or remove columns in the report? No problem. Your end result can refactor based off of those results without you needing to go in and change the code.

2. User experience. In addition to giving you more flexibility with grabbing data, the Analytics API opens up thousands of possibilities on how to animate those results. The API consumes data using JSON serialization, and combines a seemingly infinite list of powerful JavaScript visualization components and a data-driven approach to DOM manipulation. Now you not only have full control of the charting look and feel, but you also have full control to manipulate the document thus bringing that data to life.

Force.com Canvas recently had a deep dive webinar on how to use it. Force.com Canvas, which allows you to connect to 3rd party applications and surface them from within Salesforce, now makes it easier than ever to integrate with your external systems. In Summer ’13, Force.com Canvas will be generally available and full of several new features. Once the summer release rolls out, you can: distribute canvas apps in a standard package, have more granular control over security, put multiple Canvas components on a Visualforce page, and communicate between multiple Canvas apps using eventing and listeners.

There were a few additions to Apex and Visualforce that packed a lot of punch. First off, Chatter in Apex (the artist formerly known as ‘Connect in Apex‘) will be generally available in Summer ’13. Chatter in Apex, which exposes Chatter API resources as Apex classes thus removing the need to make any HTTP callouts,  has several new and updated classes which can all be found in the Apex Reference Guide. If you want to see a more in depth demo and code walk through, check out the Spring ’13 Developer Preview webinar.

Visualforce also had some awesome new additions. First off, configurable timeouts JavaScript remoting requests is now supported for summer. This was an idea taken off the IdeaExchange in order to support timeouts up to 120s and is useful when you might be calling a method that requires a longer timeout for triggers and other processing mechanisms. In addition, in the world of HTML5, we’ve added extra customization support around cache manifests and removing post-process tidying so that Visualforce doesn’t try to clean up your code when you are trying to follow JS framework syntax (like Knockout.js for example).

First off, you now have the ability to create your own custom publishing actions on any Chatter enabled object. This means you’ll be able to perform more complex actions, like creating a record with pre-populated fields or invoking a custom Visualforce pages, using chatter actions.

Once Summer ’13 rolls out, take a peek at the newly improved Developer Console. They have redesigned the look and feel to reflect what developers are used to seeing when using an IDE like a menu bar and a structured, organizable console layout. Moving forward we will continue support for the IDE plugin, and we are refactoring it to work using the Salesforce Tooling API. The plan is to open-source the plugin when the refactor is done. In parallel, we will also continuously optimize the Developer Console. To see a deep dive on the cool things you can do with developer console, check out this webinar.

Bring it on, Summer!

If you want to get started early playing around with the summer release, sign up for a pre-release org. The switch to the new API version will happen in a couple of weeks, but you can get started as soon as you like! Feel free to reach out to me on twitter (@samantha_ready) if you have any questions and I’ll help you out the best I can.

The Spring ’13 Preview Release Notes Are Out!

Getting Started with Chatter in Apex

February 6, 2013
By Samantha Ready
Like our posts?
Subscribe to our blog!
Get notified when we publish new updates.