The Unevenly Distributed Present of The Internet of Things

I've been putting together a developer facing IOT experience for Dreamforce, and so I've been thinking about developers and the Internet of Things quite a bit. Developer fall, broadly speaking, into one of three camps: newbies, bilinguals or revolutionaries. Where are you on this curve and where do you want to be?

I am often reminded of William Gibson’s famous quote, “The future is already here — it’s just not very evenly distributed.” Many of us carry super computers in our pockets, some of us wear insanely powerful machines on our heads (and look great doing it BTW) and others are deep into their personal Internet of Things (IOT) journey.

I’ve been putting together a developer facing IOT experience for Dreamforce, and so I’ve been looking around about that last category quite a bit.  Developers thinking about the Internet of Things fall, broadly speaking, into one of three camps: newbies, bilinguals or revolutionaries.  I estimate these to be approximately 90%, 9% and 1% of developers, respectively. 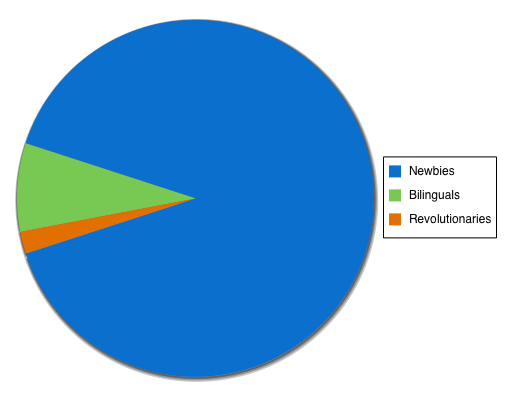 Newbies are developers who haven’t heard of the IOT, have heard of it but haven’t had time to yet investigate it or deny that the it is anything more than marketing hype.  This is the vast majority of developers today.  There is a lot of marketing hype — yes, IOT is the new black — but just because something is hyped doesn’t mean it’s not real.  Developers need to (once-again) activate their finely honed BS detectors to sort the wheat from the chaff, because IOT concepts like instrumentation and automation are very powerful, very real and very available.  Tesla instrumenting their cars as documented in their widely read post, A Most Peculiar Test Drive, is the new normal.

Bilinguals are developers who recognize the IOT as the new normal and are creating new machine-enhanced interfaces to existing systems.  They understand how to talk to APIs and understand that hardware is just another tool.  Most companies harnessing the IOT today fall into this category.  These bilinguals are creating successful patterns for other companies to discover and adopt, and they’re setting important expectations in their own organizations about available data and automation baselines. These practictioners are creating meaningful, incremental improvements, already, and will continue to do so, setting a higher bar each time.

Revolutionaries — well, this is where the real action is. This new group of IOT practitioners fully groks the new normal.  They don’t think twice about using, shaping and remixing APIs, they have high expectations for computational power, and they’re not constrained by what systems could do just a few years ago.  IFTTT is a revolutionary, as is Technical.io with their new Javascript powered board Tessel.  Rather than setting a higher bar, these companies are likely to erase old bars altogether and reinvent entire businesses or industries.

Newbie, bilingual or revolutionary:  where do you want to be on this curve?

If you’re in the majority of developers who are just getting to know IOT concepts, your opportunity is to dive in, to take a deeper look, and to integrate this new dimension of computational thought into your system designs.  Dreamforce this year will be a great opportunity to learn how to do this.  The Connected Device Lab, what I’ve been working on, will have lots of great organizations to talk to, workshops to participating in and open lab time where you can get to know a wide variety of IOT prototyping boards, finished products and educational tools.

I look forward to seeing you there!

Things To Do in the Connected Device Lab #DevZoneLab

The Best IoT Education is at Dreamforce, Part 3: The Equipment

Internet of Things at the Dreamforce 2014 Developer Zone – a Retrospective

November 14, 2014
By Pat Patterson
Like our posts?
Subscribe to our blog!
Get notified when we publish new updates.