Twitter CEO Dick Costolo is an improv veteran who uses improv techniques to run his business. Learn from how you can leverage these same skills to improve your project discovery at this year's DreamForce.

Twitter’s CEO, Dick Costolo, regularly speaks about how his background doing improv (or improvisational comedy) at the Annoyance Theatre has helped him to run his business.   If you’ve ever seen an improv show, I hope you can see how improv can help you stay “in the moment”.  If you don’t know what improv is, check out the first 3 minutes of this video from Annoyance Theatre founder Mick Napier:

Now you’re probably wondering, “How on earth did they come up with that hilarious idea?” The reality is that they didn’t come up with concept of the “Wormy Deli”.  That idea was born in the moment.  Because the performers were all open to its creation.  And the audience is usually satisfied with the results.  That’s exactly why Dick Costolo extols the virtues of improv philosophy in business.

You may be thinking, “That’s hard.  I could never do that.”  Of course, you can.  Life is an improvisation.  We don’t always know where we’re headed or how we’re gonna get there.  Especially, if you’re involved in IT project discovery.  But the fate of your project rests on being able to determine what the users need to drive the business. To make it faster, smarter, or to create the connections necessary to unlock game-changing business value.  You just need to learn the “rules” of improv to help guide the way.

I was lucky enough to spend a number of my post-college years in Chicago learning improv from and performing with some pretty incredible talents. People like Del Close, Amy Poehler, and Jack McBrayer.  Improv is all about being in the moment, amazing listening and observation skills, and collaborating to build something out of nothing with your fellow performers.  The same is true of good project discovery.

Improv and Better IT Discovery

By applying an improv mindset to your discovery sessions, you’ll learn to shed preconceptions and judgment while gaining empathy and the ability to fully commit to someone else’s idea even if you don’t quite get where they’re going.  You see, some of the best discoveries of mankind have been mistakes of a sort.  Christopher Columbus thought he was going to India.  Alexander Fleming left out a petri dish in his lab and it grew a blue-green mould.  Gross, sure.  But it allowed him to discover penicillin.  You never know exactly what you’ll find if you push judgment to the side – just for a little while.  They’ll be plenty of time for that later in the project.

If you’d like to learn more about using improvisation for project discovery, you’ll definitely want to attend this year’s DreamForce.  The session is called “How improvisational theatre techniques can improve your discovery skills”.  We won’t be growing mould, but we’re hoping you make a few discoveries of your own.   Hopefully, you’ll learn why 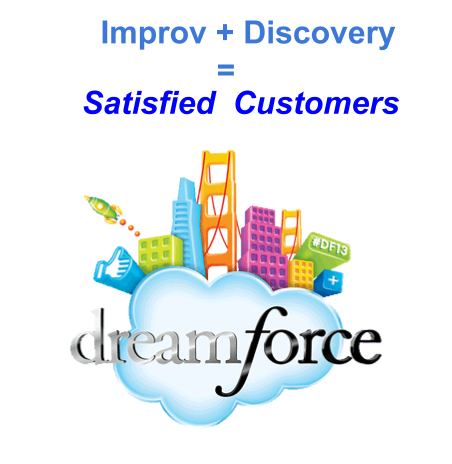