The Power of Women @ Dreamforce ’13

Dreamforce '13 was dedicated to the power of women. I felt that power all week, but my favorite time was meeting our developers, both men and women, in the Women in Technology Salon in the Dev Zone. 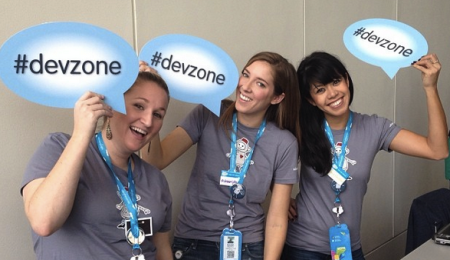 Dreamforce ’13 was dedicated to the power of women.  I felt that power all week, but my favorite time was meeting our developers, both men and women, in the Women in Technology Salon in the Dev Zone.

Women in the Dev Zone

Things kicked off with Pamela Fox‘s luminary session, Teach the World to Code (watch on YouTube), in the Dev Zone Community Theater.  Pamela is the co-founder of Girl Develop It, San Francisco, and a former frontend engineer at Coursera.  Her current passion is developing online courses at Khan Academy to teach kids 4th grade and up how to code.  Her message was that everyone should learn to code and that as developers, we can help do the teaching. 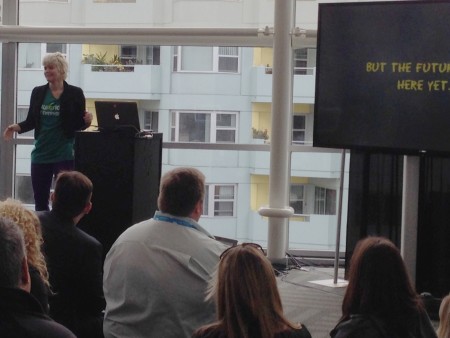 Pamela’s message was a great backdrop to the Dev Curious: Coding Talk for Non-Coders session, led by Leah McGowen-Hare and Peter Chittum from salesforce.com. It was amazing to see the Salon packed with Salesforce Admins and other non-coders who were hungry to learn.  Leah and Peter recommended that whether you want to be a full-time programmer or not, you can elevate your career (and get more “dev cred”) by taking Introduction to Object-Oriented Programming with Force.com Code (ADM231), a developer class for admins/non-coders.  I can’t wait to see all of those women slinging code at Dreamforce ’14! 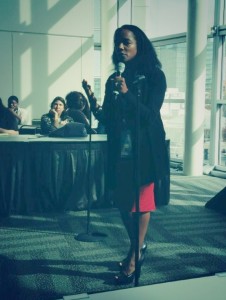 Penny Herscher and Lori Williams coached us on Becoming a Powerful Communicator, recommending teaming up with others before a meeting if your view (or gender) is in the minority, and directing your thought as a question to the most influential person in the room – that way everyone will pay attention to the answer, and your idea.  They also didn’t flinch when a mouse ran over Lori’s foot during the presentation! 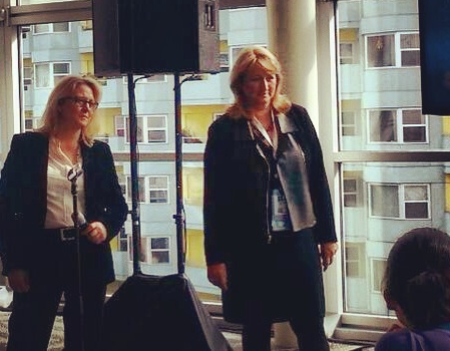 In Next Steps as a Force.com Developer, Debbie Kuklis and April Nassi from salesforce.com encouraged experienced Force.com developers and women with Java/.NET backgrounds to amp their careers by attaining Salesforce Certifications and by participating in the active Salesforce Developer Community and Force.com MVP program.

Over in the Hilton, at the Community Success Zone, Melanie Quandt & Geraldine Gray‘s Salary Negotiations, Knowing Your Worth and Not Settling For Less session ran twice, providing tips to admins and developers on how to get the pay they deserve.  Note: I saw some some pretty interesting salary stats in the Force.com Careers 2.0 session, too (watch on YouTube). 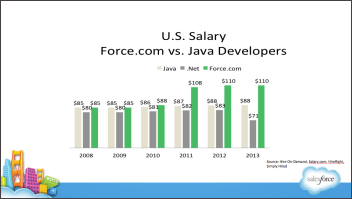 A huge THANKS to everyone who stopped by the Salon to chat, attend a session, or network with other developers. The sessions were packed, and the feedback has been overwhelmingly positive, including a lot of “why aren’t there MORE sessions like this?” and “Thank you so much for creating this space!”

One person I am super thankful for is Geraldine Gray, the founder of the Girly Geeks chatter group and a tireless advocate for empowering women in the Salesforce community.  She participated in the Salon the whole time, hacking a Star Trek model, helping newbies with Salesforce questions, and posing thoughtful questions. 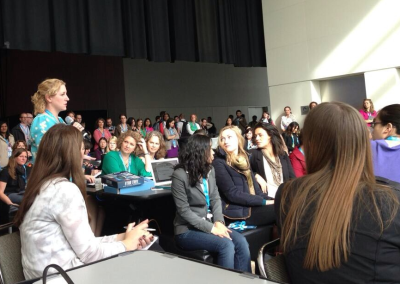 Other Awesome Women (and Men)

Speaking of Geraldine…the 2nd annual FemmeForce & Girly Geeks Networking Event kicked Dreamforce off on Sunday night.  The topic was Growing Your Career, and the attendees heard from a panel of women leaders, engaged in lively table discussions with women from all roles, and networked afterwards with Salesforce customers, partners, and employees. 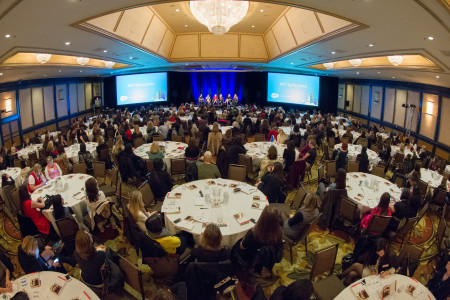 For the developers in the audience, Chia Hwu’s advice resonated when she encouraged them to step out of their techie roles, saying, “Don’t hide behind the tech and intellectual pursuits instead of being a leader.”  Also, it was a special honor to have industry veteran, Sandra Kurtzig, on the panel.  The crowd responded with spontaneous applause when she shared that she was the first women to take a tech company public. She recently started tweeting, so give her a follow: @SandyKurtzig. 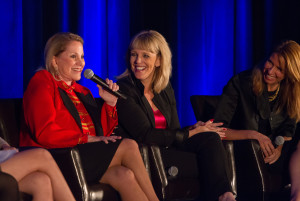 One unexpected outcome for me has been the overwhelming support from the men in the Salesforce community. One of the key messages in Lean In is that men and women need to work together to make a significant change in the ratio of men/women in our industry, so I’m encouraged by and thankful for the male allies in the developer community.

Next Year: Bigger and Better

This was the first year for the Women in Technology Salon.  We’re looking to make it bigger and better next year, and we want to make an impact all year long. Please email me (mscotton@salesforce.com) if you have ideas, events, or groups we should explore – there might be a groovy WITbot t-shirt in it for you! 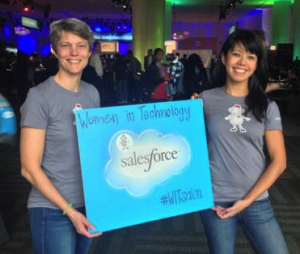 and I celebrated by watching this great David Letterman interview.   It’s amazing how far both technology and women have come – and how far we have to go.  I’m glad to be along for the ride!

Luminary Developer Sessions You Must Attend at #df13 #devzone

Women in Tech: Keep Trying and You Will Become a Force.com Developer

Women in Tech: Coding and Teaching Kids to Code

May 15, 2014
By Mary Scotton
Like our posts?
Subscribe to our blog!
Get notified when we publish new updates.