On February 8, 2014, I was witness to the start of a movement. A movement that is empowering young black people with something we all love: code. A movement that will hopefully make us stop and think the next time we see a young black man in a hoodie: is he a thug, or a genius?

On February 8, 2014, I was witness to the start of a movement. A movement that is empowering young black people with something we all love: code. A movement that will hopefully make us stop and think the next time we see a young black man in a hoodie: is he a thug, or a genius? 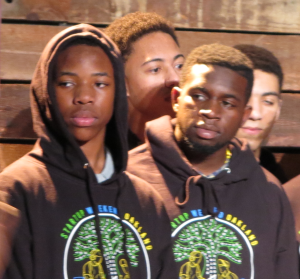 Oakland was my home for 10 years, and what I love most about Oakland is what Ashara Ekundayo, co-founder of Impact Hub Oakland, called radical inclusion. The thoughtful mixing of people from all races. I call it disruptive diversity: not hiding from our differences, but welcoming them and celebrating them, and calling everyone to action to join the movement.

This Startup Weekend was sponsored by #Yes We Code, a national initiative to teach 100,000 low-opportunity youth to code. I didn’t know about #Yes We Code or Van Jones until this event, and it turns out there are a lot of other people and organizations I did not know about: Kalimah Priforce and Qeyno Labs, Mitch Kapor, Freada Kapor Klein, PhD and the Kapor Center for Social Impact, and the Hidden Genius Project, to name a few.  All working to bridge the digital divide for people of color. 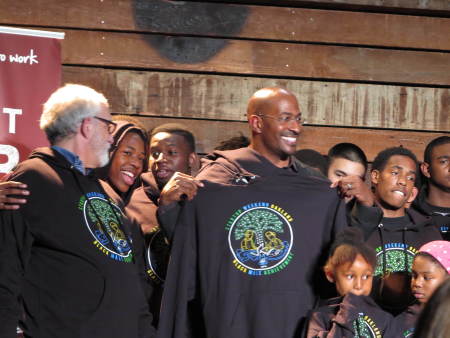 Co-organizer Ayori Selassie, an old friend from salesforce.com, invited me to the hackathon along with other salesforce.com volunteers. Ayori is a tireless advocate for Blacks in Tech, and is handing the “Tech Torch” down to her daughter, age 8, who pitched a product idea on Friday night. Leah McGowen-Hare, another old friend from salesforce.com, who volunteered as a mentor for the hackathon, is passing the Tech Torch to her son and her daughters. Her son, a middle-schooler, was one of the students who hacked for good over the weekend. 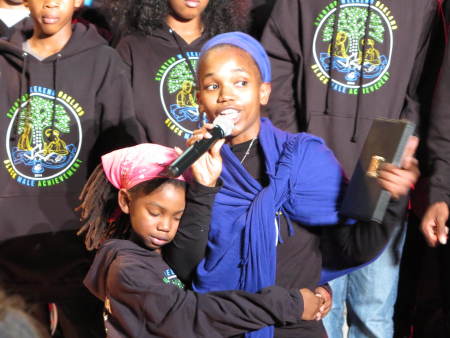 Ayori Selassie and her daughter

The event was captured thoroughly in this article in Oakland Local, which opens with a quote from Ayori, so I will not repeat the details, but instead share what inspired me the most: meeting George.

When I arrived Saturday night, just before the Gala, the hackers had been coding all day. I walked around the 2nd floor of Impact HUB Oakland (a beautiful space!), peeking into the work spaces where the teams were still coding and sketching and strategizing.

I saw a young man sitting on a couch, looking at his phone, wearing a hoodie. Maybe in another situation, I would have been intimidated, based on a societal bias against black kids in hoodies.  But, it was a Salesforce1 Platform hoodie, so I said “Hi” and asked him if he was enjoying the event. He told me, with the delivery of a seasoned entrepreneur, “Yes, I’m the product manager for the Connect the Dots app, which is a online community for black students who are in private schools and feeling isolated. The app gives them a way to connect with other students to talk about their issues.” To which I replied: “How OLD are you?!?” He said, “14.”  14, and spending his weekend coding for good, for his peers, to make their education experience better. 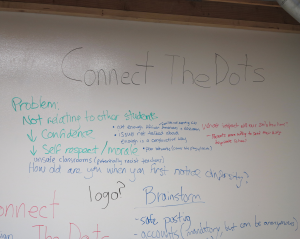 This event was not about coding the next Candy Crush, it was focused on black teens coding apps to solve real issues that black teens face.  Connect the Dots tied for 3rd place. Read about it and the other winning apps, HelpCircle (1st place) and CourtDateApp (2nd place), here.

I am so inspired by the students and adults I met and the energy I felt. Tech companies are missing out on this amazing energy because of preconceived biases that keep people of color from sometimes even getting in the door for a job interview. I want to see that change; to be part of that change. I am signing up to be part of this movement.