Now with more than 1.5 million developers, the Salesforce developer community has doubled in size over the last 18 months. To mark this huge achievement, we are announcing Salesforce1 Developer Week - a week of meetups around the world starting April 27th.

With the recent launch of the Salesforce1 Platform and the increased demand for next generation mobile apps for the enterprise, there has never been a better time to be a Salesforce developer! The level of energy and passion Salesforce developers bring to every event is unmatched – the 20,000 developers we saw at Dreamforce was one for the record books. And then there is the crazy demand for Salesforce technical skills. We saw recently that Salesforce Architect is the highest-paying IT career bringing home $200,000 a year.

The Salesforce developer community’s momentum is unstoppable. Now with more than 1.5 million developers, the community has doubled in size over the last 18 months. With numbers like that, it’s not surprising that the Salesforce1 Platform is the industry’s leading Platform as a Service.

To mark this huge achievement, we are announcing Salesforce1 Developer Week – a week of meetups around the world starting April 27th. And we have launched a new developer website to support this community’s epic growth and innovation.

During the week of April 27, over 65 Salesforce developer groups worldwide will meet up to learn more about Salesforce1 development, participate in new coding challenges, and network with each other. Additionally, our developer evangelists will be hitting the road to meet and network with the global community.

To join in the excitement, locate your local developer group or start a new one in your city by checking out the cities participating. Finally, we will be  airlifting surprise goody packages to each location so don’t miss out!

The New Home for Every Cloud Developer

As we enter this exciting new phase, we are are saying good-bye to the Developer Force website and brand. In its place, we are launching Salesforce Developers, a new website (http://developer.salesforce.com) and brand to serve our Salesforce1 Platform developers who are building the next generation of apps with Force.com, Heroku, and ExactTarget Fuel. As the new home for Salesforce developers, we aim to make it easier to discover content, connect with the community for support and track networking events.

With the launch of the new website, we’re introducing a host of exciting features including single sign-on for a much improved user experience as well as the ability for you to have your own developer profile. And because the website now runs on the Salesforce1 Platform, it’ll also benefit from exciting innovations with every major release.

Stay tuned as there will be even more enhancements coming in the next few months! 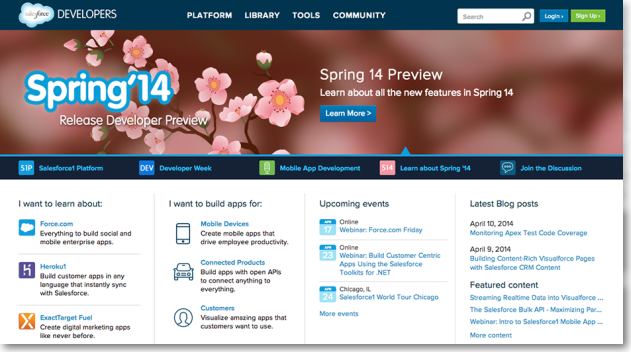 Contest Winners Show Off Their Skills with the Salesforce1 Mobile App

May 20, 2014
By Pauline Dufour
Like our posts?
Subscribe to our blog!
Get notified when we publish new updates.