Salesforce and Microsoft announced a new partnership initiative back in October 2014.  The basis of the partnership is to make customers successful with their IT endeavors.  While there will be a lot of customer facing integrations with Office 365, Salesforce1 on Windows Phone and Power BI 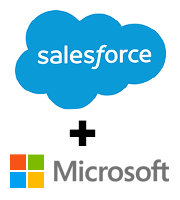 On March 31, 2015 in Santa Monica and April 1, 2015 (no joke) in San Francisco, Eugene Oksman and I have the pleasure of partnering with Microsoft’s own Jason Short as we are jointly hosting two meetups where we will be demonstrating some of the new development technology the two companies have been working on.

You can register here for either of the meetups.

What we will be talking about

Working with the Visual Studio team, we have developed a “Connected Services” provider that enables the configuration and enablement of authentication to and access of Salesforce data, directly in the Visual Studio environment.  In addition to the authentication piece, the provider also enables the developer to “scaffold” models for chosen data objects to simplify the development of apps that integrate into .Net applications.

We have also been working closely with Microsoft in the development of our upcoming Salesforce Mobile SDK for Windows and Windows Phone.  Although the SDK is currently in development, you will have a chance to see it in action.  The SDK goes beyond the existing Force.com Toolkit for .NET in a couple of areas.  First, the focus has been on modern Windows Apps providing a portable SDK that can be used for Windows Universal Apps and Windows 8 Phone apps.  Second, the SDK also incorporates the Windows Secure Store Service for securely storing data for access when offline and performance optimization when online.

I hope you can join us in either San Francisco or Santa Monica.  If not, we are looking forward to more meetups world wide during the coming year.