Using the Salesforce1 Platform as an Enterprise MBaaS

Did you know that the Salesforce1 Platform does over 2 billion transactions a day, with more than than half of these transactions happen via the API! Combine this with enterprise mobile features such as secure offline, sync, and more, and you have a great MBaaS. Get started building mobile apps using Salesforce1 services with the new mobile tutorial now.

Did you know that the Salesforce1 Platform does over 2 billion transactions a day, with more than than half of these transactions via the API! Yes, that’s a hell of a lot of API calls. We see all sorts of use cases driving this api-first approach to the platform: integrations, streaming notifications, and, of course, mobile. For mobile, API access is only part of the secret for success.

We often hear the term, MBaaS, or Mobile Backend as a Service. What does it really mean? Wikipedia defines MBaaS as a model for providing web and mobile app developers with a way to link their applications to backend cloud storage and APIs exposed by back end applications while also providing features such as user management, push notifications, and integration with social networking services.

This is a great start, but for enterprises, an MBaaS needs more: identity, encrypted offline storage, ability to sync data with the cloud, and what I often called Enterprise UX – the importance of treating mobile as an extension to existing enterprise apps and processes including those created by non-traditional developers such as admins and business users.

When you add these enterprise features into the mix, and combine them with the Mobile SDK and powerful APIs that the Salesforce1 Platform provides, you have the ingredients for a true enterprise MBaaS platform. 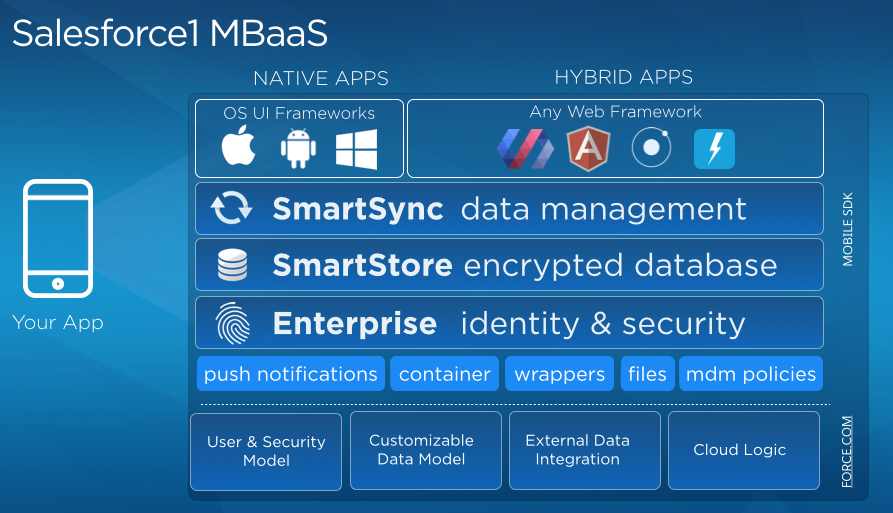 To help you get started building mobile apps using the Salesforce1 Platform as an MBaaS, I’ve added a new tutorial to the Designing Enterprise Mobile Apps With iOS & Salesforce series. You can jump right into the new tutorial to set up your backend for any mobile app – Native, Hybrid, or Web – or start from the beginning of the series to learn how build iOS apps with Swift. Get started today!

June 18, 2014
By Raja Rao DV
Like our posts?
Subscribe to our blog!
Get notified when we publish new updates.