In this blog we'll explore steps we can take to build a Tic-tac-toe app using Salesforce Lightning Components. We'll learn about components and events. You can use the steps used here to build any other Lightning app.

In this blog we’ll explore how to build a Tic-tac-toe app using Lightning Components. We’ll do so by go over steps to help us decompose the app into smaller components and wire them up using events. You can use the steps used here to build any other Lightning app.

The below picture shows how the completed app looks. You can install the unmanaged package from here, add it to Salesforce1 Mobile (Setup > Mobile Navigation) and open “Tic Tac Toe” in Salesforce1 Mobile to see it in action. You can also open it as a standalone app by going opening /c/TicTacToeApp.app 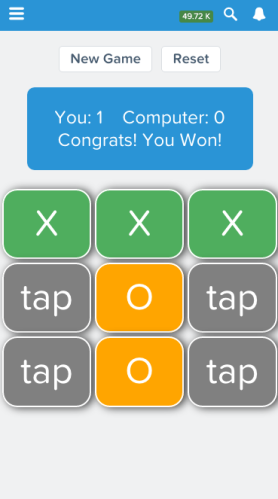 Let’s go over the steps that help us build it.

First start with the main features. In our case, our app:

Step 2 – Divide The App Into Components:

Based on the main features, we can get an idea as to how to divide the app into components.

In our case, the app is divided into 3 main components: 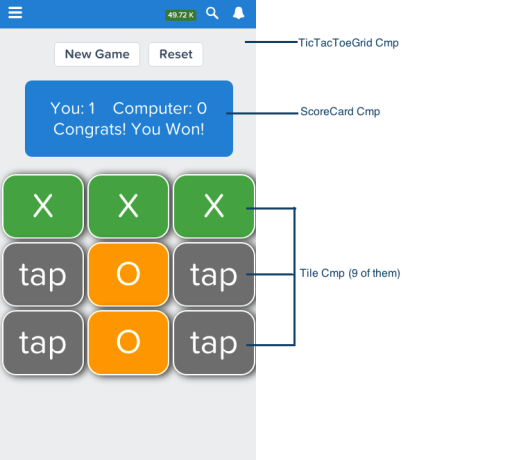 Next step is to go into details of what each component is responsible for (and not responsible for). This will not only help us implement all the features but also help us figure out what Lightning events we need and how to wire them up.

This is the main component that creates a grid of 9 Tile child components and a Scorecard child Component.

It’s not responsible for:

This is a simply score display component.

There are 9 of these components and each represent a single cell in the grid.

Each Tile component is responsible for:

Step 4 – Use Scenarios To Wire Up Events

Now that we have assigned responsibilities to each component, we can see how to wire them up.  In Lightning we can do this using eventing library. By playing out the scenarios and using component ‘responsibilities’ from Step 2, we can figure out all the events.

Our app has 3  scenarios:

At the end our app uses 5 events. The below picture shows how they are wired, which direction they travel. You can tell when they are used pretty much by looking at their names. 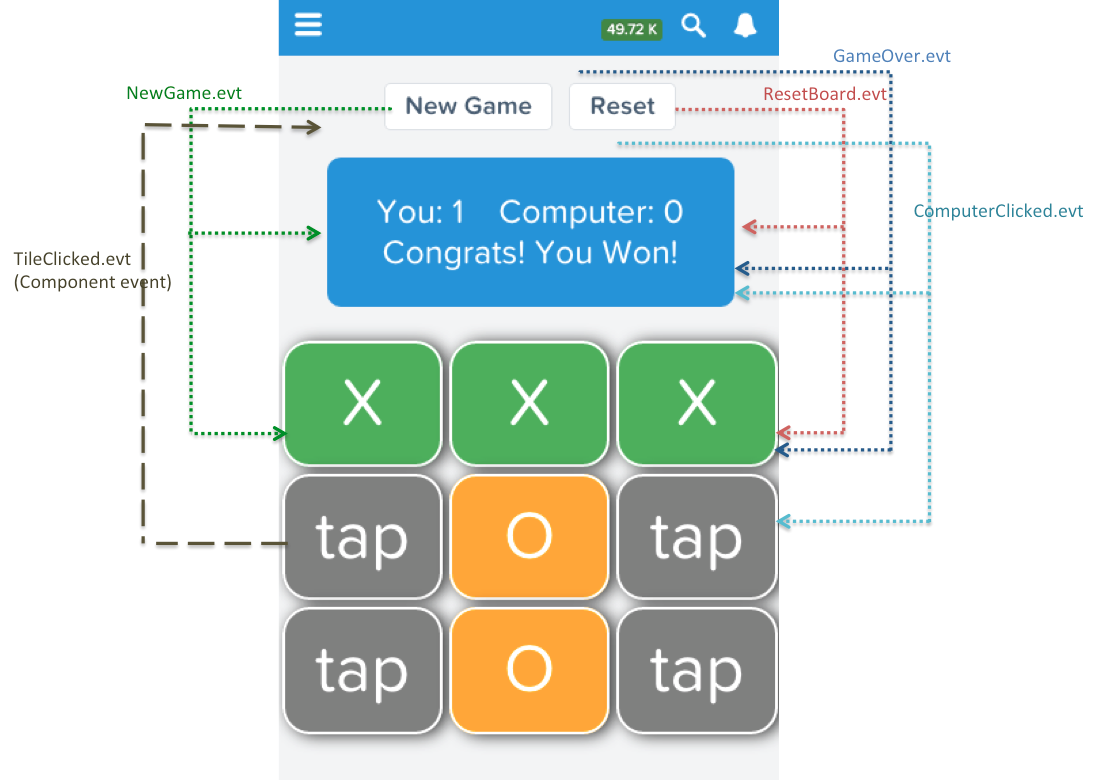 Let’s understand how events are wired up by going through them.

From earlier Step 2, we know that TicTacToeGrid.cmp notifies child components that a new game is about to begin. Because it goes from Parent to child(and grandchild) components, we’ll create an Application event called: NewGame.evt.  We will fire it when the user clicks on the “New Game” button.

TicTacToeGrid.cmp Component registers the event to indicate that it might trigger this event

1. When the “New Game” button is clicked, TicTacToeGrid.cmp fires the event.

2. All 9 Tile.cmp components listen to this event like below:

3. And when the event comes, each one of them reset their values themselves

5. When the event comes, Scoreboard.cmp simply clears it’s Win/Lose status message like below:

This is similar to the above scenario. Only difference is that when Reset happens, Scoreboard.cmp clears previous scores in addition to Win/Lose status.

Scenario 3: User Clicks On A Tile