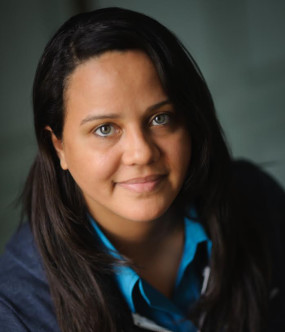 Just a few short years ago, Clara Pérez was working in the only job she could find at the time – at a call center in her home country of the Dominican Republic. At the urging of a friend, she learned the Force.com platform and is now working in her dream job as a Force.com MVP.

Clara credits the ease of learning and the enthusiasm of the Salesforce developer community with changing her career path and turning her life around. Today, she is a Salesforce Consultant with Great Wave Tech, a Salesforce Partner and leading developer of business solutions for companies. While Clara’s friend encouraged her to take the first step, she found the embracing nature of the Salesforce community, and the company itself, to be a revelation.

After earning an IT engineering degree from Pontificia Universidad in her native island nation, Clara embarked upon a career pursuing her passion – computer networking and communications technology. Within months, she found herself unemployed and feeling lost.

“I was very frustrated,” Clara related. “The only job I could find at the time was working in a call center. After working so hard through college and getting started in my career, I became very depressed that my job was to take calls. When my friend in the US called and told me they would train me in Salesforce, I was skeptical about the platform.”

From “No Way” to No Looking Back with Apex

Clara’s coding experience up to that point was limited primarily to languages like C, Java and Visual Basic that she had learned in college. Her friend’s plan to change her career path was met with some resistance at first.

“I said, ‘Salesforce?…no way!’ and was very suspect about the platform,” she declared. “My career passion was to become an IT Admin in networking and satellite communications.”

She decided to take up the training offer and was astonished to discover how easy and quickly she learned the Force.com platform. “When I was in training, I just loved it,” Clara said. “I was amazed at how fast the workflow creation was. It was eye-opening. Everything that I learned to do manually in college, Salesforce made much easier. I decided I want to be part of this…this is really something!”

After the first week of training, Clara was hooked, calling Salesforce “addicting.” She started by reading all the workbooks and doing the exercises. “Now we have Trailhead, but back then we didn’t. I was searching for answers to things,” she lamented. “The cookbooks were tremendously helpful. And community members were just always there – 24 hours it seems. Anytime I asked a question, I got a reply in the next 15 minutes. That was very encouraging for me. It was the perfect way of learning something. And, I could even help others if I knew the answers to questions that were posted!”

Just after completing her training and working in her first job as a Salesforce developer, Clara was told, “it’s time for you to write a trigger.” She researched, reached out to the community, and learned how to do it on her own. “It took me 7 times to pass the trigger to production! The work was hard, but the transition was very helpful because of the help in the community,” she stated.

From that point, Clara’s Salesforce career blossomed. One of her first major projects was for Xerox USA and was built using Visualforce and Apex. The project parameters included the ability to slice and dice account information per manager, per rep, per location – as defined by managers.

Another project was a scripting functionality for an account center that included about 50 questions. “It was like a wizard to get info,” Clara explained. “We built this cool functionality, then two releases later, Salesforce added a product doing almost exactly the same thing. I was very proud that my functionality was so similar to what Salesforce later developed.

One of Clara’s projects that she considers her “baby” was built while working for Adap.tv. It was named GIDS – Get It Done System. The UI allowed the user to request many things, including the request to create a new user. As Clara explained, “You could request a document that needed a customer signature. You could request a password reset. You could create a new user for new hires. The product escalated to have 12 components for a user to request within different record types. I am still very proud of it.”

Of the many successful configurations and integrations Clara has worked on, one is an AppExchange product called EventON, developed while she was working at OnDemand Communications Group.

Moving Into Mobility with Ease on Salesforce1

Working now as a Salesforce Consultant with Great Wave Tech, Clara has encountered more mobility projects integrating with iOS. One such project involves scanning and processing a bar code to register a product inside of Salesforce, and enabling e-signing a P.O. with the customer.

Clara is enthusiastic about learning how to develop mobile interfaces with Salesforce1. “I Love the SDK that Salesforce has and how simple it is to learn,” she enthused. “Now with Lightning components, this type of developing is very easy. When Salesforce brings out something, it is natively fixed with little or no effort at all. My customers are impressed that they can ask me to do a Visualforce project for both mobile and a browser and it takes only 1-2 hours to do mobility in Salesforce.”

Clara remarked that the entire Force.com platform enables her to be so productive. “On this platform, you can literally wake up at 8am, get a project and by 6pm have it live in production – that’s something that you simply cannot do with any other platform.”

The Salesforce Culture is a Role Model in Itself

After discovering Salesforce groups in 2013, Clara started her own group with about 15 participants. Today, she regularly has 25 or so attendees and is most proud that 4 of those are now Salesforce Certified.

“I love seeing those ‘A-Ha’ moments when somebody understands a concept,” she declared. Her enthusiastic involvement in the Salesforce community led to her being named a Force.com MVP in Spring 2015. “That is a title that I wanted since day one in Salesforce. The guy I learned the most from and who inspired me the most, Bob Buzzard, is a MVP. He was always very willing to help and answer my questions, so I consider him a role model,” Clara said.

In fact, Clara considers the entire Salesforce culture to be worthy of emulation. “Thanks to Salesforce, I went from being depressed and not working in a good job to having a dream career that is very rewarding…especially for a woman,” she commented. “If I ever wanted to create my own company, I would want to use the same principles that Salesforce has. Not only do they have it right in the technology part, they have it right in the human part, too. I just love Marc Benioff saying that he supports equally paid men and women, and his support for the human part of the technology world.”

Clara observed that there are very few female Salesforce developers. “It’s very hard to find women who code,” she explained. “I encourage women who have the curiosity to try it out. I would tell them that there is nothing to be afraid of here. Salesforce has created a platform with the tech resources and community resources to help you succeed. It really is a second family to me.”