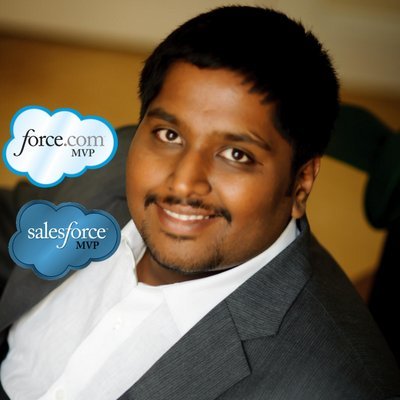 Upon graduating from Mahatma Gandhi University in 2010, Shivanath Devinarayanan was developing in C-Sharp (C#) at his first job and had no idea he would become a Salesforce MVP in a few short years. How did it happen so fast? He gives major credit to the short learning curve for Apex and the depth of community help and resources available through Force.com.

Devinarayanan parlayed his move to Apex into a rapid career ascent culminating as an architect and key member of the technical staff at Groupon – one of the largest users of Salesforce in the world. Along the way, he earned distinctions as both a Salesforce.com MVP and a Force.com MVP. Shivanath is one of only four people in the world who holds both titles.

“I started with Suyati Technologies right after college as C# developer,” Shivanath related. “We got a large publishing solutions client who was already using Salesforce and I was the only person with bandwidth to hop on project. At the time, there wasn’t much Salesforce documentation, so I had to figure out how to work with Apex on my own.”

Shivanath dug into the fundamental Apex workbooks where he found the help he needed. “The workbooks helped me a lot,” he stated. “The first thing we did was make sure we completed the workbooks, which was the main documentation at the time. And I watched a lot of YouTube videos, especially Jeff Douglas, who was my hero.”

“The learning curve for the Salesforce platform was much shorter than C#,” Devinarayanan said. “That gave me a huge edge. The Apex developer community was also very helpful and I was able to talk to other architects who walked me through solutions.”

After two short years at his first employer, Shivanath faced an important decision. “Salesforce was not huge in India at the time,” he stated. “I needed to make a choice between C# and Salesforce for my career future. It was a huge risk at that time to go with Apex,” he declared.

Devinarayanan migrated to Delhi in 2012 and became a developer and administrator at Simplion Technologies, a user of the Salesforce platform. His first project there was the Aria project where he was instrumental in building the app exchange for the company, a leader in billing and subscription.

Shivanath’s second project at Simplion became a turning point in his career advancement. He regularly interfaced with 50 clients and applied his increasing Salesforce platform expertise to deliver successful business solutions. Soon, he was promoted to Lead Associate and managed a team of 30 developers.

Data Archiving was another challenge that the Salesforce platform helped the team overcome. Devinarayanan recalled, “Groupon had lots of data coming in every week. We wanted to aggregate it and analyze it, which was almost impossible at the time. We were running out of space. We used database.com, pulled in a schema and pulled in two weeks of data very efficiently.”

“At Simplion, I knew the technical aspects of development, but saw how they used Salesforce to deliver a user solution,” Devinarayanan recalled. “It helped me understand business and how to talk to clients. As a developer, you must understand the business side of things,” he related.

Being Resourceful with Salesforce Resources

In his short time at Simplion, Shivanath said the best learning experiences came from just doing the work in Apex. If he encountered challenges, he learned to rely on the Salesforce community to work through obstacles.

“Working in Apex and leaning on the developer boards helped me more than any online documentation at the time,” Devinarayanan shared. “The boards were not huge at the time, but people were really willing to help. Blogs and workbooks also helped me a lot.”

Shivanath enjoyed working through a solution on a step-by-step basis and learned a lot through release notes. “Blogs were also a key,” he said. “Jeff Douglas inspired me a lot.”

“When I started out working with Salesforce, it took me a year to get proficient,” Shivanath related. “Today, with the depth of resources and community involvement, somebody starting out might need only six months to be proficient. If you are starting out now, do the workbook…you will learn a lot,” he emphasized. “People take for granted all the things Salesforce gives you for free. Lately, Twitter at Force.com is an amazing resource.”

In 2013, Devinarayanan moved back to his hometown, Chennai, and was recruited by Groupon. As a member of the technical staff, his role as a Salesforce developer and architect quickly immersed him in important projects.

“Groupon had just acquired a company and was merging two Salesforce orgs into one large international org,” Shivanath recalled. “It was a big project – 28 countries – everything was connected to Salesforce. We were the second largest user of Salesforce in the world at that time with 16,000 users. There was a lot of complexity and integration.”

According to Devinarayanan, the Salesforce platform was the key to the successful integration of the Groupon merger. “We just put things into Salesforce and let it expand,” he elaborated. “It was a huge, huge integration piece and we had a team of four. From my perspective, it would be a nightmare to use another platform for such a huge integration.”

At Groupon, Shivanath and his team were always pushing the envelope and, as he stated, “working on some amazing things.” Among those were architecture, development of the console and the service cloud.

Another Career Step. Another Leap of Faith.

In April 2015, Shivanath made another major career path change – starting his own consultancy – Dazeworks. His firm is a pure-play Salesforce services provider. Dazeworks expertise includes app development, data, integration with Salesforce.com and migration to Force.com.

Shivanath gives back to the Salesforce community he learned so much from as one of the top leaderboard contributors with close to 4,500 answers, and by leading multiple Force.com webinars.

What started as a steep learning curve to master another code platform, helped Shivanath realize that Salesforce was the platform to help propel his career path from college in 2010, to one of the largest cloud services companies in the world, to starting his own consulting firm in five short years.

As developers consider their career, Devinarayanan encourages them to look closely at Salesforce. “It’s a turnkey solution with all the integration points. It’s easy and has all the analytics. I have so much love for this platform, it was the best decision of my life.”