Hands-On Workshops return to the IoT Zone for Dreamforce 2015

We are adding an exciting range of workshops for the Internet of Things Zone into Agenda Builder. If you have ever want to get hands on with some of the gadgetry of IoT but never had the chance to use them, learn about the opportunities that will be at Dreamforce 2015. 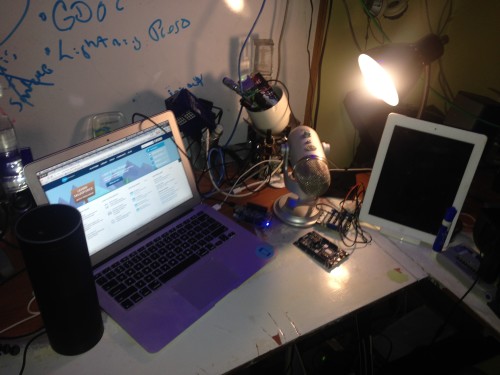 When I’m not on the road, I work from a small study in Chicago.  It doubles as our guest bedroom, so if anyone has ever seen pictures of the room and wondered why there’s a big dresser behind me … well, there you go.  My desk is a sea of scattered random items  – some of them gifts like the TARDIS USB hub, the fake fish aquarium, the equally fake bonsai trees.  Others are items which had some use at some point, and might still: the Yeti mic, a couple sets of screwdrivers, the now completely disconnected OUYA.

Ever since Pat Patterson asked me to help him organize the workshops for the IoT zone however, there has been a slowly growing set of what I guess Internet of Things types would call … well, things.  A Raspberry Pi, an Electric Imp, a couple of Arduino style boards, an Amazon Echo, and now not one but two LIFX smart bulbs.

Some of these things I’m not even sure what to call them.  My wife asked what one was and I responded, “Uh, a board?  For sensors?  I think it’s sensor board.  Actually, I think it’s called a hat or something.”

It’s been fun and interesting to learn how to tinker with the devices.  The real problem is that there are so many more things to the Internet of Things these days.  Used to be you would just hook an Arduino to a banana and call it a day.  Now we have drones, wearables, smart everything.

Usually to learn the things the first step is to get the thing.

Not if you are coming to Dreamforce.  Today we published fifteen distinct workshops for the IoT Zone, each with at least one repeat time.  These workshops range from small devices like Electric Imp and Proximity Insight’s iBeacon, to wearables like Nymi’s heartbeat sensing wristband and even cloud based services like Carvoyant for connected vehicle fleets, Automatic’s OBD based device, Xively’s Blueprint central control hub, ThingWorx or even ARM’s server software for mBed devices.  Note that Emerson’s session is an exception to the rule, it’s not hands-on but they promise to be demoing some really cool technology.

To find these workshops, simply go to Agenda Builder and search for “IoT Zone”: 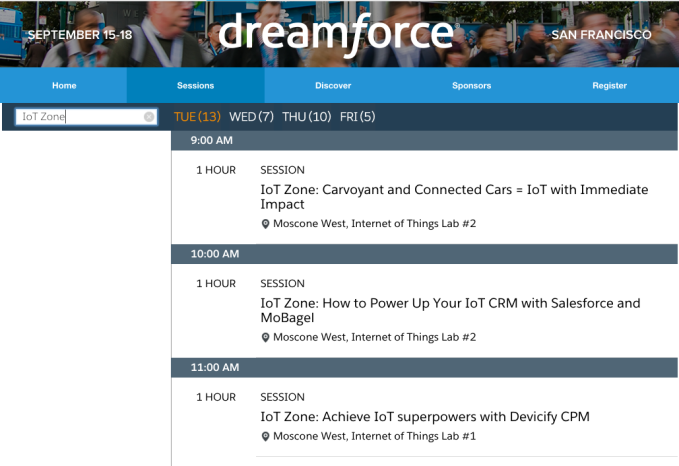 It’s an exciting range of materials, and all you need to bring is yourself.  Well, usually – some of the sessions may require smartphones with specific requirements, for instance.  Always double check the abstract.  There are already repeats for the workshops and more workshops are on the way.  Check this space or catch me on twitter for updates.

Seating is limited.  Signing up early is highly recommended.

January 13, 2020
By Josh Birk
Like our posts?
Subscribe to our blog!
Get notified when we publish new updates.