New Lightning Support in the Force.com IDE – and Everywhere!

Salesforce Engineering was able to create the new Lightning Experience UI using an advanced Lightning Code Editor. We’ve improved it, and we’re now ready to share that with you! In the all-new release of the Force.com IDE, you’ll see significantly improved support for developing with the Lightning Framework.

The all-new Lightning Code Editor gives you the following features: 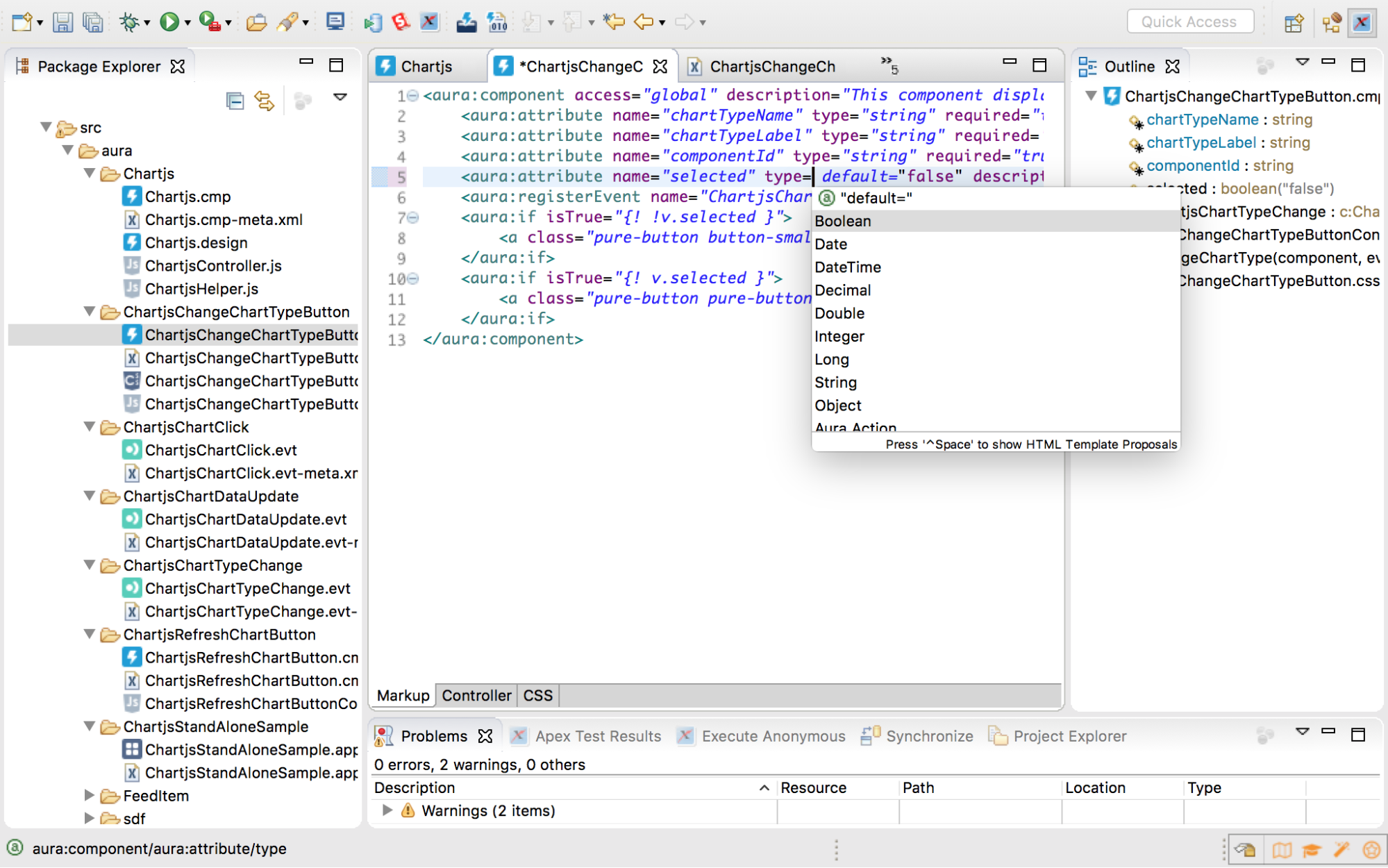 For starters, you can edit an entire Lightning bundle as one logical unit. This is the most requested feature for Lightning Components in the Developer Console! The Force.com IDE’s multi-tab editor provides switching capability within a bundle: between component markup, cascading style sheets, component documentation, JavaScript helpers and controllers, design files, image assets defined in SVG, and renderers.

Editing three full bundles opens just three (!) workspace files, with member tabs along the bottom of each file so you can see each resource in context. If you’re the type of developer whose hands never leave the keyboard, use Ctrl+O to see the outline of the current file and Ctrl+Shift+A to see all files in the bundle.

Even the most well-versed Lightning Component developer won’t remember every Lightning attribute — so we’ve added auto-completion and code hinting nearly everywhere. Ctrl+space and tab-complete your way to functional UIs as you rapidly prototype markup, CSS, and even JavaScript. What does that Aura property really mean? Look it up right in the IDE with the Lightning documentation view.

We want you to be productive with Lighting Components in whatever tool you want to use. And so we’ve also worked in conjunction with your favorite partner-led IDEs: in Mavensmate, Illuminated Cloud, Welkin Suite, and others. Be sure to check out the recently added Lightning support in those IDEs now.

Support for Lightning components is the first major feature we’ve added to the Eclipse IDE plugin this year, but it won’t be the last. The Salesforce technology team is hard at work on some amazing tooling enhancements in our APIs that will surface next year as productivity features in every IDE that supports Salesforce.

The tools team’s mission is to provide an ecosystem of tools that resonate with every developer, administrator, and power user. We have a long menu of IDEs, trusted VCS providers, migration tools, and code/test analyzers from which we can build solutions to help you prewire a Salesforce project for success. What should the Salesforce team and our developer experience partners do next? Let us know in the comments what would make your life easier! While you’re chewing on that, make sure to install the new Force.com IDE.

JavaScript Buttons, Lightning, and You: A Blog Series

Touring Dreamhouse: A Primer to Developing in Lightning Experience

April 20, 2017
By Christophe Coenraets
Like our posts?
Subscribe to our blog!
Get notified when we publish new updates.