This trend in community-led events is clearly a reflection of the passionate community that continues to grow around the Salesforce platform.

As it was the very first Salesforce community-led conference in France, there was a lot of expectation. Thanks to a hard-working and dedicated team, the event proved to be a huge success! The French Touch Dreamin’ organizers gathered over 24 speakers and a crowd of 250+ ultra-motivated attendees coming from 13 countries as far away as Israel and Uruguay.

With tracks dedicated to all roles (developers, admins, and users), French Touch Dreamin’ had a content-rich agenda. In this post, I’ll walk you through some of the highlights of the event.

As always at Salesforce related events, we got our day started with the traditional forward-looking statement. And since having fun is a big part of our culture, the conference also kicked off with a dance!

This led us to the opening keynote presented by Holly Goldin Firestone, senior manager of community programs at Salesforce.

Along with her obsession for French macaroons, she reminded us of our community’s Ohana spirit and values. She recommended that attendees get involved in their local developer or user groups, and continue to join community events such as French Touch Dreamin’.

She shared with us some Trailblazer’s success stories such as Bill Powell’s journey and a few community achievements such as helping to rebuild a house torn down by a tornado.

“We succeed when people around us succeed”

For those who are not familiar with this concept, a Demo Jam is a brief and intense competition that regularly takes place online during the third Thursday of every month.
Demo Jams showcase 4 or more application vendors that get 3 minutes to demonstrate their solutions. The winner of the Demo Jam is then designated by a vote from the audience.

Back to our live session at French Touch Dreamin’, the presenters did such a great job with their demonstrations that the scores were too tight to designate a winner. It ended up in a draw but as the organizers reminded us: “everybody won.” 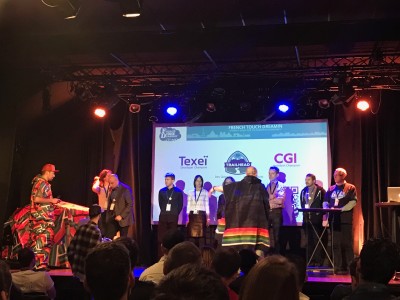 Just after the Demo Jam, we organized a quiz with the French Touch Dreamin’ audience featuring a mix of Trailhead questions and trivia. The competitive spirit was high but friendly! The game was a bit chaotic but the audience was delighted; cheering for all the contestants, whether or not they won.

During the day there were a variety of technical sessions dedicated to best practices, including how to manage Lightning Component states, and advice from architects on how to design, build and improve applications at scale. Let’s take a look at one of my favorite sessions from the event.

Getting Certified – Proven tips for success

One of the non-technical sessions that I found particularly interesting was Salesforce MVP Samuel de Rycke’s session on Salesforce certification. Having earned 11 certifications, Samuel was able to share his personal experience on how to get certified, as well as his views on the benefits in terms of credibility and career milestones.

“If you are certified, you are much more likely to be successful in your job”

He then gave us an overview of the available certifications with a map of their complexity and required knowledge.

“There are less [certified] Salesforce Technical Architect than astronauts”

Samuel also shared his recommendations on how to get ready for the exam. The first step is to have a plan so you can cover all the necessary subjects, and so you can dedicate sufficient time to preparation. He also emphasized that hands-on practice is a key part of your preparation. On the day of the exam, Samuel recommends that candidates relax and carefully read each question before answering, as the details can have a high impact on the answer. Exam questions are multiple choice and focus on business scenarios, such as Universal Containers and Knowledge Applications. There are no points taken out for wrong answers.

Along with best practices, a number of the sessions were dedicated to innovation.

Salesforce MVP Daniel Peter presented his first release of HyperBatch, a new open source project he created. Hyperbatch is a tool that provides an alternative to the standard Apex Database.Batchable interface for processing large amounts of records. Built with performance in mind, Daniel claims that it can provide significant performance improvements. 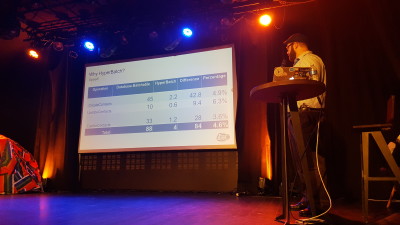 In order to prove its performance advantages, Daniel shared test results from running CRUD operations on 300,000 contacts where HyperBatch was able to complete the operations 21.7 times faster. In addition to speed, Daniel claims that HyperBatch has additional advantages such as lower concurrency limits and fewer issues related to row locking. However, he recognized that it has at least one serious limitation when compared to batchable Apex: it needs to be run from a UI and cannot be scheduled.

Following his presentation, Daniel ran a live demo of the benchmark scenario, and proved that he didn’t make up the numbers about HyperBatch’s amazing speed! The HyperBatch project can be found on GitHub.

The most surprising and innovative presentation of French Touch Dreamin’ was without a doubt “Codename: Airforce1” given by MVP Jean-Luc Antoine and Aurélien Laval. They shared their vision of the future: improving customer interaction with Salesforce & holograms!

With some businesses, sales and customer service representatives have in-person conversations with their customers while sharing data on a screen. For example at a bank, they could be discussing reports on different accounts or at an insurance company they could be discussing policy options. A common problem with those scenarios is that both parties need eye contact to have a proper discussion, but the monitor often creates a physical barrier between them.

Project Airforce1 is all about breaking that “wall” by introducing a new way to interact with data through holograms. With the holographic display, you can visualise data and maintain eye contact at the same time – and improve in-person interaction. 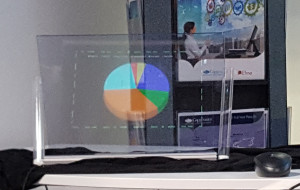 With only a tablet, 2 Smarties® tubes, a piece of plexiglass and some DIY skills, they demonstrated how you can build a user interface that presents Salesforce Console data as a hologram. Given the limited means, the result is truly amazing. In addition to the impressive display, Airforce1 also enables gesture control by sending real-time data updates from a webcam to the Salesforce streaming API.

You can find more detail about their project in this blog post.

While the biggest announcement at Dreamforce ’16 was AI for everyone powered by Salesforce Einstein, one of the most exciting announcements for developers was the new Salesforce Developer Experience. 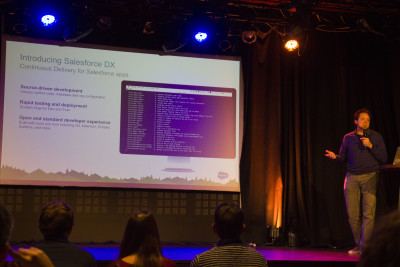 Peter Chittum, Director of Developer Evangelism in EMEA, had the privilege of delivering a presentation on Salesforce DX to a crowd of developers sitting on the edge of their seats. Starting with the typical forward-looking statement, he went on to present the new initiative, which is currently available as a private developer preview.

Salesforce DX aims to help developers build together in teams with an integrated, end-to-end lifecycle designed for high-performance agile development. Built around a source-driven development model, Salesforce DX enables developers to use modern collaboration technologies such as Git to version control everything across their team – code, org configuration, and metadata.

The core of Salesforce DX is based on a Command Line Interface (CLI) and is a plugin to the popular Heroku CLI. With Salesforce DX, you can either use the CLI directly or as commands that have been integrated into the Force.com IDE. Along with new tooling, Salesforce DX is also introducing the concept of Scratch Orgs. This new org type can be created rapidly and programmatically, and is disposable, so you can spin them up as needed and get rid of them when you’re done.

Peter gave a live demonstration of this new development flow starting from a Git Repo that he cloned. He then authorized the repository in his Salesforce DX environment hub and performed the following tasks from the CLI:

This short demonstration proved some the promising capabilities of Salesforce DX. Expect to see more in the near future!

French Touch Dreamin’ was also an opportunity for the community to support equality and diversity. 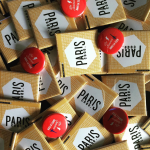 Before the event, Salesforce and French Touch Dreamin’ partnered with the town of Paris to provide free tickets for underrepresented groups and unemployed persons as part of a new initiative known as ParisCode (in French).

The purpose of the ParisCode project is to help people begin new careers in IT by offering free training and counseling. 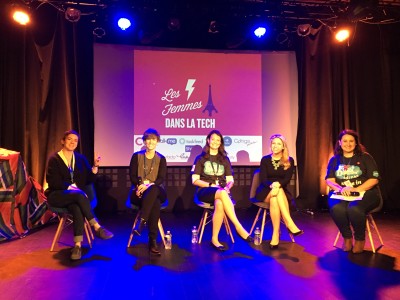 This panel gave an opportunity for Rachel Delacour, Zayne Turner, Kerry Townsend, Holly Goldin Firestone and Laura Diaz (left to right on the picture) to share experiences with gender bias, as well as the successes they have had during the struggle for equality throughout their careers. Speaking in front of a well-balanced crowd of roughly 50% men and women, the panelists highlighted that WiT is not a women-only concern – men need to be involved as well.

With efforts such as this panel and through regular events such as Women in Technology meetups, the panelists hope to raise awareness about the issue of gender inequality. The panelists also shared their belief that the discussion cannot only be held during third-party events, it needs to be taken to the workplace. They stressed that corporate equality programs featuring occasional training and presentations are not sufficient on their own. To drive real change at their organizations, people need to be involved all year long. Joining a Salesforce Community Women in Technology group can be a good start for that.

The fight to bring – and keep – more women in the IT industry continues.

The Salesforce Developer Relations team would like to congratulate the French Touch Dreamin’ organizers, sponsors and all of the speakers for such a great event.

Interested in learning more about what it takes to organize a successful community-led event such as French Touch Dreamin’? We’re working on a second post where we go behind the scene with words from the organizers.

While we eagerly await the return of French Touch Dreamin’ next year, here is a list of additional community-led events that is current as of November 2016: