Salesforce.com uses agile across 200 scrum teams and makes it very easy for any engineer to find their best fit.

In the Technology & Products organization at salesforce.com we make a habit of asking ourselves “what if?” questions. What if we could do our major releases with no interruption to our customers? What if we could commit to release dates years in advance? Well, over two years ago we asked ourselves: “What if it was as easy to move around salesforce.com as it was to leave?” The answer we came up with was Opportunity Open Market.

The inspiration for Opportunity Open Market came from the clash of ideas between two big theories. One was the idea of motivation 3.0 from Dan Pink’s Drive. (The RSA Animate video describes the idea succinctly: motivation 3.0 replaces the old carrot and stick days. Today’s worker is motivated by three things – autonomy, mastery, and sense of purpose.) The other was Liz Wiseman’s Multipliers workshop. One such multiplier is “The Talent Magnet.” So we asked ourselves: is it better to challenge managers to attract talent to their teams, or make it easy for individuals to find what drives them?

Our then-head of development had asked the “what if?” question, and represented the “talent magnet” side of the debate. Paul Antaki, then a development manager, was passionate about the “drive” side of the debate. He spearheaded the movement to making it easy for individuals to find what drives them. And Opportunity Open Market was born. In close collaboration with managers and makers from all groups in Technology & Products, Paul and others ran focus groups, sought feedback, and met weekly to iterate on a plan to make it happen.

ole process, Paul kept Opportunity Open Market focused on the right values. “I felt it would be more productive–and more in line with the culture that I wanted to create, and the motivations Dan Pink wrote about–to make it about the people. So rather than attracting talent (‘pull’) it should be about letting everyone find what drives them (‘push’).” We fine-tuned a program with a simple message and as few rules as possible. We kicked things off in October 2010 in a big way, with the “Opportunity Bazaar” party, complete with food, drinks, a DJ and hundreds of participants.

So how does Opportunity Open Market work? Simply put, Opportunity Open Market makes it easy for anyone to move from one scrum team to another at any major release boundary. With around 200 teams, working on vastly different technologies and products, that is a lot of opportunities. Our major releases happen three times a year, and each release, there is an opportunity to work with a new team. This brings with it a chance to to learn new technologies, work with different customers, or collaborate with a different manager and team.

There are very few rules that govern Opportunity Open Market: 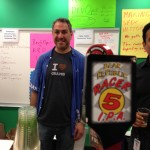 As you can imagine, there were plenty of concerns when we first rolled out the program. What if someone wanted to move every release? What if everyone left a team at the same time? Our answer to those concerns was what Paul called the “invisible hand.” Invisible hand is a term/metaphor that Adam Smith created to describe the “self-regulating” behaviours of the marketplace, though Paul used it in a different way: “I was struggling with the rules around open market, like: what level do you need to be? Should we require a certain tenure at salesforce? How frequently can you move? etc. And then it dawned on me that this was a very centralized way of making this work. There already checks and balances in place, because it’s a transaction between two parties: the person leaving their team and the team receiving them.” This notion allowed us to replace complex rules with a few simple guidelines, but requires all parties to have the right intentions, places the challenge on managers instead of individual contributors, and constantly requires us to reinforce our values as an organization. 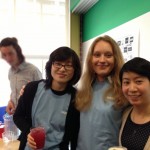 When we launched Opportunity Open Market, we did indeed encounter some interesting situations, such as every member of a team leaving en masse for new teams. There was an underlying root cause in all cases, and having Opportunity Open Market actually shined a light on that cause (in a big way). In some cases, the leaders of those teams found solutions, like sharing maintenance duties across many teams instead of having one team focused on maintenance (who likes that?). In other cases, moves caused a few individuals to alter their behavior (i.e. not be difficult jerks that no one wants to work with!).

Our challenge now is maintaining its essence and the culture benefits as we grow. As part of the initial group, I was a huge supporter of the program. I drove the operational side of things, including building the tools that run the program (documentation, FAQs, program updates, and internal collaboration tools where teams create their internal “reqs”), holding occasional “town hall” meetings to reinforce the intent of the program, and running regular surveys to measure its effectiveness. In addition I was often called on to arbitrate disagreements stemming from moves people were making. Now running Opportunity Open Market is a part of my team’s charter, and we are working on expanding across additional groups and looking to make it easier to make cross-functional moves as well.

This past Friday marked our 8th job fair since we launched Opportunity Open Market. It’s a great opportunity for teams to show off what they are working on, and generally have a good time and show off their team camaraderie.

Why do we put so much effort into making this easy and fun? Because a company like salesforce.com can only succeed when people are doing the best work of their careers, and that only happens when they come in to work every day excited and challenged. Giving people the opportunity to move within the company means that everyone can grow and flourish.

Get your Git On

August 23, 2010
By Quinton Wall
Like our posts?
Subscribe to our blog!
Get notified when we publish new updates.