Learn how TerrAlign has taken advantage of the Dreamforce experience for eight years and has been an AppExchange Partner since 2006.

Sales Resource Optimization. What is it? Getting the most out of your sales force. It is the product which TerrAlign provides for its ever-growing customer base. TerrAlign’s technology empowers companies to easily design or realign sales territories to maximize resources and geographic potential and ultimately, performance. Having developed the first and best products in the market for more than two decades, TerrAlign continues to innovate and looks forward to serving its customers for decades to come.

I am excited to share yet another Dreamforce Sponsor Success Story from a long-time partner, The TerrAlign Group. TerrAlign has taken advantage of the Dreamforce experience for eight years and has been an AppExchange Partner since 2006.

I recently spoke with Ken Kramer; Vice-President of Sales & Marketing at TerrAlign, wanting to learn what was the “secret” ingredient for his successful use of TerrAlign’s partnership with Dreamforce. “The secret is very simple,” he said. “It is being there, year over year, delivering a solution with value and listening to the customers to continually make that solution better. For a smaller organization, that continuity shows our commitment to both the customer base and to the entire salesforce.com ecosystem – many of our leads come from referrals from SFDC employees.” It is one of the principle reasons when it is time for Dreamforce, it is time for TerrAlign as well.

“We believe TerrAlign is a very strategic solution that delivers great value.” Kramer continued. “But we need to get that message out to companies which have sizable sales forces. Dreamforce allows us to get in front of people who have the right profile for us to really help.” He added, “At Dreamforce, we always manage to get traffic, and while we do have to do some triage to get to the quality leads, both during and after the show, we have never failed to convert some number of Dreamforce leads into customers.”

They say timing is everything and half of success is just showing up – perhaps those are true, but TerrAlign also believes in putting themselves in position to succeed. Dreamforce 2013 saw TerrAlign present once again – on the floor as a veteran sponsor and familiar face. There are many companies that TerrAlign sees multiple times different years before they truly engage. Once example is Houghton Mifflin, whose Sales Operations Manager, Brian Wickham, greeted the booth by mentioning the cool give-away he learned of in the pre-show email, and questioning TerrAlign’s ability to integrate with the TM module, something they had added a couple years ago, but after initially meeting.

“We had been looking for a system to help manage out complex territories for many years, early conversations with TerrAlign at Dreamforce, possible 2009, showed us that was where we wanted to go, but budgets and specific integration functionality with regard to TM kept us from closing the deal at that time, “ Wickham stated. “When the budgets aligned and a high priority time sensitive project come up in late 2013, we immediately recognized Dreamforce as the best opportunity to get hands on with the product, do our due diligence on possible competitors and complete what is usually a multi-week evaluation and negotiation process in a very short time period, in person on the expo floor.”

“Another big thing for us, “Wickham continued, “was the familiarity. While always impressed with the functionality, we’re cautious when it comes to selecting vendors, as many start-ups simply don’t survive. Seeing TerrAlign year over year and building that relationship made the decision to enter a multiyear agreement much easier; we knew they were going to be there for us, and continue to enhance the solution as they had since we first met.” 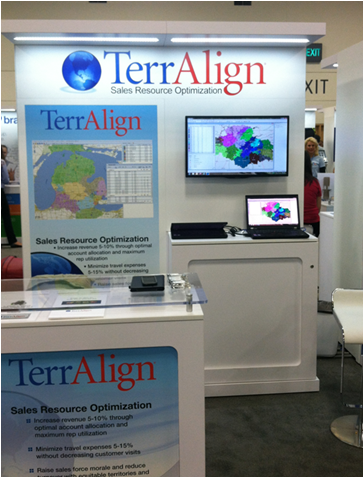 The business might have been closed without having a booth on the show floor, but by being a recognizable, sought out, component in the sea of other exhibitors, Kramer attributed TerrAlign’s presence at Dreamforce to being able to close the deal within two weeks of attending Dreamforce. “Being there on a continuing basis keeps us ‘Top-of-Mind’ to our customers and future customers and thus contributes to our ability to start or continue the sales dialogue on the show floor.”

TerrAlign is different from the majority of Dreamforce partners. It has been in existence for more than 20 years, it has no VC backing and any marketing expenditures comes from its bottom line. It is very particular how much and with whom marketing dollars are spent. Each year the Dreamforce partnership costs are weighed but each year the ROI yield value. Selling an enterprise solution means individual events can either be a success or a complete loss. If they sell something it pays for the event, if they don’t, they don’t, usually no gray are in between. While TerrAlign has viewed their Salesforce partnership as a long term investment, Kramer is still happy to see each Dreamforce produce a positive return

I asked Ken to provide some tips he has experienced in his eight years of attending Dreamforce. So with this, I offer:

For more information on TerrAlign, please go to the website: http://www.terralign.com/

A Second Year of Success at Dreamforce!

MapAnything: A Solution to Save Time, Streamline Tasks and Drive Productivity

August 13, 2014
By Jennifer Hersom
Like our posts?
Subscribe to our blog!
Get notified when we publish new updates.