One of the most exciting features in Summer ’17 is the Lightning Data Service. Through its force:recordData object, you’ll be able to build faster—with less code! In this post, we’ll break down everything there is to know, and how to leverage force:recordData in your own Lightning Component development – and there’s even a Trailhead project to help you earn a badge!

A common question developers ask when moving from Visualforce to Lightning Components is, “why do I have to write code to call an Apex controller just to save or update a record”? Happily, the first step toward answering that question appeared in the Winter ’17 release with the Developer Preview of force:recordPreview. With the Summer ’17 release, that feature has been renamed force:recordData and is officially in Beta, so it can now be used everywhere!

If you’ve not heard of force:recordData, it’s part of the Lightning Data Service. It basically eliminates the need to write both an Apex Class and client-side JavaScript to create, read, update or delete a single record. Before we examine an actual use-case, let’s first do a quick force:recordData review. force:recordData uses the following syntax:

In addition to the aura:id, you’ll notice that force:recordData has a recordId attribute that it uses to retrieve the record itself. The record data is retrieved automatically by the component when the recordId is assigned, such as when the component loads with the force:hasRecordId interface.

How much of the record is returned—that is, which fields—is determined by the layoutType attribute. We can either return all of the fields defined in the standard Record Detail page layout (FULL), the fields in the compact page layout (Compact), or only the fields you choose with the fields attribute.

Once retrieved, the record result is stored in the aura:attribute defined by the targetRecord attribute. The Lightning component then begins to “listen” for that record to be updated by either the standard Record Detail layout or another component on the page.

This is all pretty sweet, and I have been happily building components with force:recordPreview for some time now. However, while building a component for the Global Lightning Now Tour’s hands-on workshop, I came up against a challenge that force:recordData was able to elegantly solve for me.

The hands-on workshop uses the Dreamhouse application, which is a reference application that those of us on the Developer Evangelism team built to illustrate many of the development possibilities for Lightning Experience. This reference app is for a fictitious real estate company to help them manage houses, brokers, leads, and so on.

I built a Lightning Component that can be added to a Property Record page that shows properties which are similar to the selected property based on criteria such as price, number of bedrooms, square footage, and so on. The criteria used in the search is defined as a Design Parameter, and therefore can be selected by the Admin when they add the component to the page. This also allows multiple instances of the component to be on a page, each displaying properties based on different criteria. 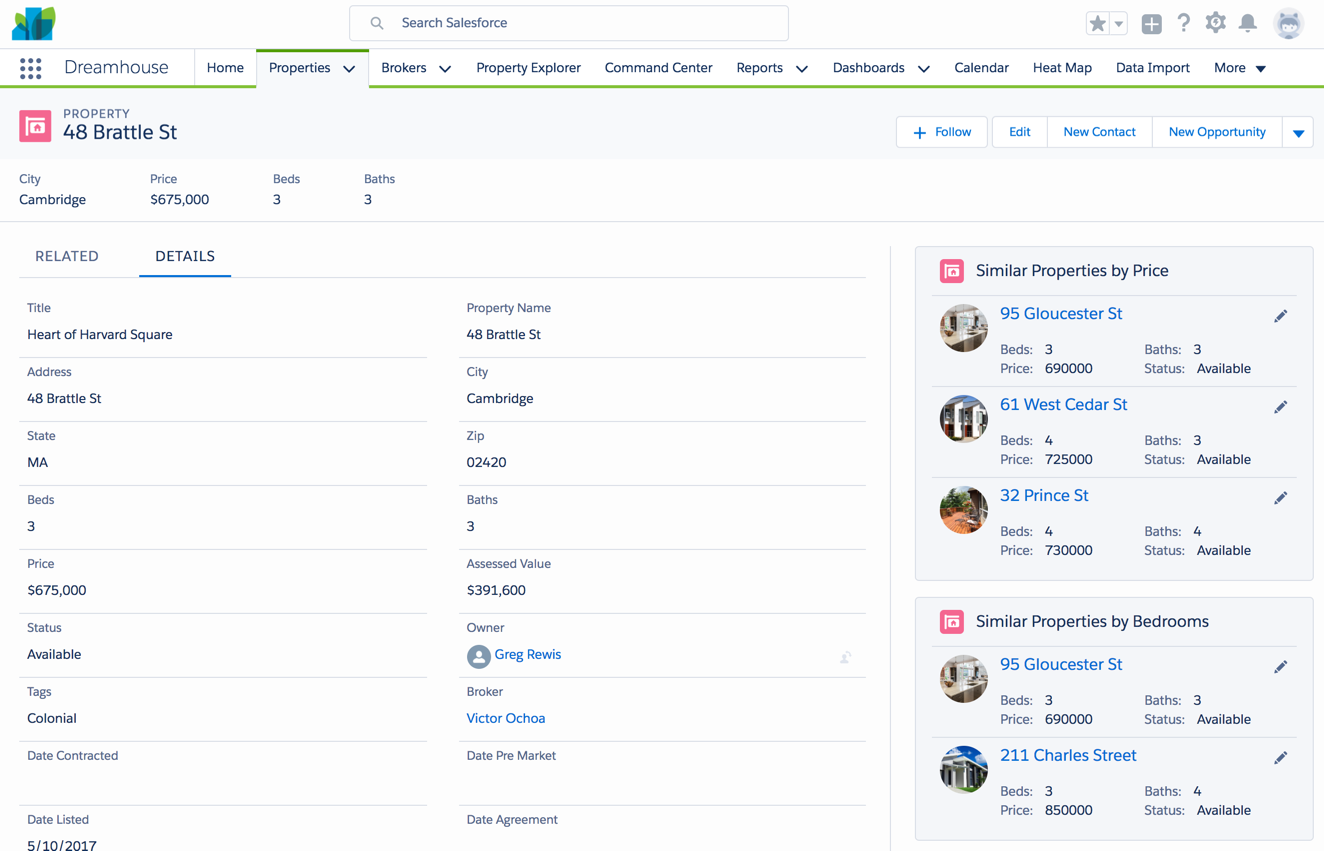 Then I added the ability for the user to edit one of the similar properties being displayed, directly from the component itself, without actually navigating to its Property Record page. This was also straightforward—until I noticed a problem. If a particular property appeared in multiple instances of the component on the page, when I edited it from one of the components, its info didn’t update in the other component. Or, at least it didn’t until force:recordData came to the rescue!

So for the Similar Properties component, I made each item in the list a component itself, named SimilarProperty, with a force:recordData instance containing the data for that particular property. This trick was the “secret sauce” to being able to update a “remote” record in the component, and having that same record update in another component without needing to reload!

In the SimilarProperty component, you’ll notice that this instance is using the fields attribute, instead of layoutType, to only retrieve the few fields that we’re displaying or are interested in within the component.

The final use of force:recordData in the component is to pre-fill fields in a custom edit dialog, as well as handle the updating of the record when the Save button is clicked. The challenge, however, is that the edit dialog itself is also a separate component, named SimilarPropertyEdit, added to the main Similar Properties component. Which begs the question, how do you tell the edit dialog which record is being edited?

Of course, components within the same namespace can communicate via events, but since all of the components were children of the main component, I settled on simply using attributes, allowing them to “bubble up” from the child component. You’ll notice that both child components have an attribute named remoteRecordId.

When the edit icon in the SimilarProperty component is clicked, it triggers a function named editRecord.

In the SimilarPropertyEdit component, you’ll notice that the force:recordData instance doesn’t have a recordId attribute:

Instead, the component has a handler that is listening for a change to remoteRecordId and then fires the getRecord function:

Finally, when the Save button of the custom edit dialog is clicked, the saveRecord function is called, which updates the fields of the targetRecord and then fires the saveRecord() method of force:recordData. If the save of the data is successful, all of the force:recordData instances on the entire page—even those in different components—with that recordId are updated without needing to go to the server! In addition, the function’s callback then fires an application event to notify other components in case they need to take action due to the update of the record.

In conclusion, Lightning Data Service and force:recordData give Lightning Component developers a simple, straightforward way to create, read, update and delete individual records without the need to write an Apex controller. In fact, the SimilarProperties component only uses a single Apex method to execute the initial search based on the Design Parameter set by the Salesforce Admin. And yet, it reacts to changes to the main Property Record, as well as having the ability to update other records “remotely”. You can find the source code for the SimilarProperties component here, and make sure to do the whole project to earn a badge!

Be sure to check out the Release Notes for Summer ’17 for even more developer goodness, as well as the full Lightning Components Developer’s Guide.

Lightning Components in Visualforce with Lightning Out

August 16, 2017
By Philippe Ozil
Like our posts?
Subscribe to our blog!
Get notified when we publish new updates.