In December we launched Mobile SDK 3.0, and with it new and enhanced features like full offline support, a more focused User Interface, and the ability to work with web components and JavaScript libraries like Polymer. As exciting as that was, the new Salesforce Mobile SDK 3.1 goes even further. Based on feedback from the community, we’ve unified the app architecture so that apps built with the latest SDK – hybrid or native – now have access to the same core set of functionality regardless of their target platform. All the libraries, all the APIs, and all the major mobile building blocks have consistent implementations, while at the same time, provide full access to the host operating system.

What makes this especially exciting is that this also extends to your choice of development tools or UI frameworks. For iOS, developers now have the ability to consume the Salesforce Mobile SDK through CocoaPods. In addition, Android Studio and the Gradle build system are now fully supported for native apps. Previously, developers often had to choose amongst their favorite APIs and features when selecting between native and hybrid architecture. With the Salesforce Mobile SDK 3.1 release, mobile developers no longer have to make these trade offs for selecting a preferred technology.

Some of the exciting new features ready to developers today include: 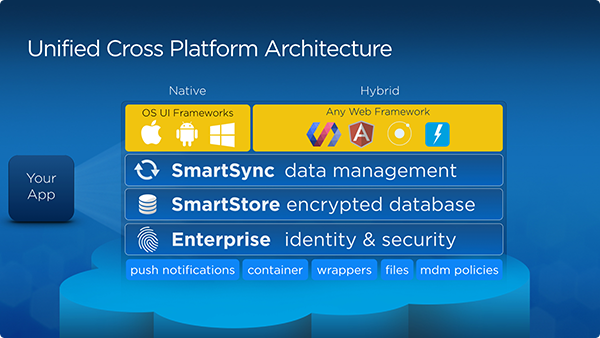 Customer data is at the core of most enterprise apps and SmartSync makes it extremely simple to access it. Synchronizing records between the cloud and a mobile app required tedious, low-level API calls. With SmartSync, developers get all of the critical sync capabilities to build fast and responsive apps. The latest SDKs include:

Code snippets are great for elucidating a specific concept. But code in isolation is often not enough to convey everything required to build an app, ready for production. In the 3.1 release of the Mobile SDK, we have built a highly adaptable canonical sample apps, designed to serve as the basis for brand new applications. These sample apps, implemented in native code on iOS and Android as well as a cross-platform hybrid implementation provide clean implementations, showcasing advanced SmartSync features bound to native and hybrid UIs. The apps have enough in common to show a common pattern, yet under the hood, have implementations that will make native app developers feel right at home. Developers can tweak these apps for their own purposes or browse the code to understand how all the modules work together.

Native iOS developers asked for it and got it! Developers now have the ability to consume the Salesforce Mobile SDK through CocoaPods, which makes dependency management a chore of the past. It’s now easier than ever before to insert Salesforce Mobile SDK modules into an existing app or evolve a new app with other third party libraries.

Android Studio and the Gradle build system are now fully supported for native apps.  Gradle support for hybrid apps will arrive after the next Cordova update.

Leverage certificates as part of an enhanced authentication flow without asking your users to enter a username and password.

Creating Hybrid Apps with the Salesforce Mobile Pack for Backbone.js

August 13, 2013
By Pat Patterson
Like our posts?
Subscribe to our blog!
Get notified when we publish new updates.