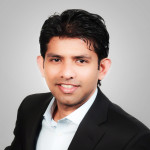 From New Delhi to New York with Force.com
How a Developer Used Salesforce to Succeed on Wall Street

Rexlo Joe has come a long way from Tamil Nadu, the southern India state he once called home. As lead architect for the Navatar Group, Joe now supervises a 80-person team in New Delhi from his Wall Street office. He and his team used the Force.com platform to turn the firm into a leading provider of applications for the financial services industry.

Joe and his Navatar Group team provide a suite of cloud-based apps for brokers, bankers and deal-makers across a wide spectrum of firms. Navatar clients appreciate how the flexible, intuitive apps help them be more productive. And Rexlo Joe directed the development of these coveted apps with Force.com after years of developing on other platforms.

Back in India, he had worked his way through college by building internal Web pages for U.S. businesses, picking up Java, .NET, and AJAX along the way. He departed for America in 2004, completing a master’s degree in computer science at Farleigh Dickinson University’s New Jersey campus, a short train ride from Manhattan. Two years later, Joe crossed the Hudson River and landed at Navatar’s headquarters on Wall Street, where he first encountered Force.com.

“I come from a Java background,” Joe noted. “Force.com allowed us to approach the development in a different way – we started building these apps from the ground up thinking about what we need, rather than being concerned about how to build the technology to make it work. Salesforce helps us get these products out there right away with the quality that we need.”

Joe recalled that his first task with Force.com was to design custom pages and load them as an S-control into an application. “From the beginning, I was impressed by how well Force.com leveraged what I already knew,” Joe said. “I first saw that with the Force.com Web Services API, which allowed me to make good use of my familiarity with SQL database queries. I’ve gotten all the help I need from the Force.com discussion boards and code samples. My best advice for learning Force.com is to find a project and get to work.”

Joe learned application development on the Force.com platform the same way he mastered his other programming skills  – by jumping in – and using the resources available in the Force.com developer community.

Joe and his team found all the online resources they needed through Salesforce courses, classes, forums and webinars. “I went on to use the AJAX Toolkit as a way of mastering the Force.com Web Services API. As I moved on to Apex and Visualforce, I found a treasure trove of resources at developer.salesforce.com, including sample code and the invaluable help of other developers.”

As an early adopter of Apex, Joe took full advantage of the server-side code to gain productivity. He found the language, with its Java-like syntax, so intuitive that he never had to stop development and pick up the instruction book. “With Apex, I can update five different tables with a single piece of code, rather than having to update each table separately. That means what took us 120 lines of client-side code can be accomplished in 10 lines of Apex. Equally important, Apex gives us transaction control, including commit and rollback, which are crucial for the kinds of applications we build.”

Packaging Individual Functions with Force.com to “Productize” an App

The first app Joe and his team built was Navatar Private Equity Cloud. They took pieces and functions previously built for individual clients, started putting them together, and packaged them into a single app. The Navatar development team was able to “productize” functions built for individual clients, enabling them to ramp up development quickly and easily.

“Packaging is very straightforward with Force.com – just put everything together and click a button. The process is very expedient,” Joe commented.

Joe and his team tackled building user interfaces with Visualforce in the same way he mastered Apex – by applying what he learned at the Force.com discussion boards to a development project. As with Apex, the Visualforce productivity benefits have been substantial. According to Joe, “We use Visualforce when clients want a more customized user interface. Visualforce has shortened that cycle dramatically.”

Development projects are coordinated between Joe and his New Delhi team using Navatar’s internal version control system, which is tightly integrated with the Eclipse-based Force.com IDE. “This setup has helped development personnel on two continents work more efficiently, especially when coordinating with our quality team,” Joe says. “In addition, the Force.com IDE opened the door for us to write custom deployment scripts using the Metadata API, which we have used to add functionality to our clients’ custom applications.”

Another benefit of employing the Force.com platform for app development is the economic efficiency, allowing Navatar Group to competitively price their products. “We did some marketing analysis on software strategy comparisons, and our pricing is very beneficial. Plus, we don’t have servers here, relying on Salesforce servers for cloud access,” Joe stated.

The Navatar development team is constantly utilizing Force.com to rollout new products and update current apps. The group works on four products simultaneously – at least ten upgrades across all products each year.

Joe’s team realized that financial advisors have 30-40 clients they focus on simultaneously, so they need to easily see multiple screens in a single view. The most recent app added to the Navatar suite using this approach is Navatar One.

“Salesforce does good job with a ‘tab’ approach to stay on one page, so we built a hub page called One Hub for advisors to log in and log out, and they can do everything on this single page, easily customizing what they need for each client on this single screen. In Force.com, we used a lot of open-source code and drag-and-drop to easily develop this functionality,” Joe added.

Collaborating with the Force.com Developer Community

Joe and his Navatar team have also taken advantage of salesforce.com’s developer preview programs, which puts new releases in the hands of developers ahead of launch and enables early integration of the latest features into client apps.

These days, Rexlo Joe really knows his business, too. Having advanced from Force.com novice to expert, he is doing less coding and more inspiring, as he works with his New Delhi team. “I try to act as a resource for the group, answering their questions, pointing them in the right direction, and getting them to see the enormous opportunity of cloud computing development.”

Calling all developers to join Salesforce.com at #sxsw!

June 10, 2015
By Mallory Leggere
Like our posts?
Subscribe to our blog!
Get notified when we publish new updates.